Note: This blog was updated on January 6th 2017 to align more closely to official documention.


So, that’s the concept. How can you see all this in Windows? The Storage Management API is the answer, but unfortunately it’s not quite as straightforward as you might think. This blog aims to untangle the many objects and their properties, so we can get one comprehensive view , like this:

Volumes, their capacities, how they're filling up, resiliency, footprints, efficiency, all in one easy view. [/caption]

The first thing to understand is that in Storage Spaces Direct, every “volume” is really a little hamburger-like stack of objects. The Volume sits on a Partition ; the Partition sits on a Disk ; that Disk is a Virtual Disk , also commonly called a Storage Space . 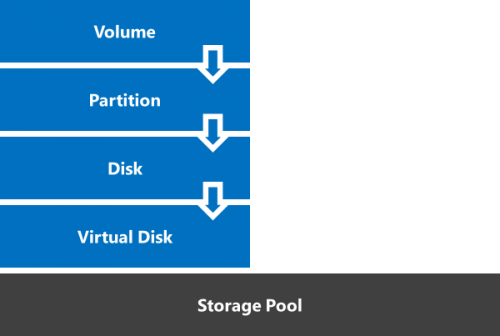 Classes and their relationships in the Windows Storage Management API.[/caption]

Let's grab properties from several of these, to assemble the picture we want.

We can get the volumes in our system by launching PowerShell as Administrator and running Get-Volume . The key properties are the FileSystemLabel , which is how the volume shows up mounted in Windows (literally – the name of the folder), the FileSystemType , which shows us whether the volume is ReFS or NTFS, and the Size .
Get-Volume | Select FileSystemLabel, FileSystemType, Size
Given any volume, we can follow associations down the hamburger. For example, try this:
Get-Volume -FileSystemLabel <Choose One> | Get-Partition
Neat! Now, the Partition isn’t very interesting, and frankly, neither is the Disk , but following these associations is the safest way to get to the underlying VirtualDisk (the Storage Space !), which has many key properties we want.
$Volume = Get-Volume -FileSystemLabel <Choose One>
$Partition = $Volume | Get-Partition
$Disk = $Partition | Get-Disk
$VirtualDisk = $Disk | Get-VirtualDisk
Voila! (We speak Français in Canada.) Now we have the VirtualDisk underneath our chosen Volume , saved as $VirtualDisk . You could shortcut this whole process and just run Get-VirtualDisk , but theoretically you can’t be sure which one is under which Volume .

We now get to deal with two cases.


Case One: No Tiers


If the VirtualDisk is not tiered, which is to say it uses mirror or parity, but not both, and it was created without referencing any StorageTier (more on these later), then it has several key properties.


Ok, that wasn’t so bad. Now, what if the VirtualDisk is tiered? Actually, what is tiering?

For our purposes, tiering is when multiple sets of these properties coexist in one VirtualDisk , because it is effectively part mirror, part parity. You can tell this is happening if its ResiliencySettingName and PhysicalDiskRedundancy properties are completely blank . (Helpful! Thanks!)

The secret is: an extra layer in our stack – the StorageTier objects. 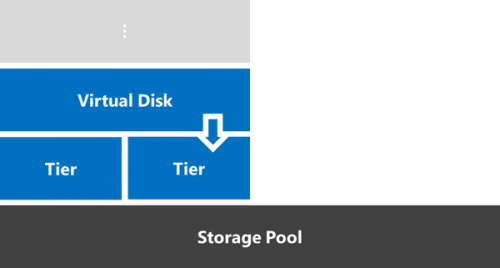 Sometimes, volumes stash some properties on their StorageTier(s).[/caption]

Let’s grab these, because its their properties we need. As before, we can follow associations.
$Tiers = $VirtualDisk | Get-StorageTier
Typically, we expect to get two, one called something like “Performance” (mirror), the other something like “Capacity” (parity). Unlike in 2012 or 2012R2, these tiers are specific to one VirtualDisk . Each has all the same key properties we got before from the VirtualDisk itself – namely ResiliencySettingName , PhysicalDiskRedundancy, Size, and FootprintOnPool .

Check it out!
$Tiers | Select FriendlyName, ResiliencySettingName, PhysicalDiskRedundancy, Size, FootprintOnPool
For each tier, if we divide the Size by the FootprintOnPool , we can obtain its storage efficiency.


U Can Haz Script


This script puts it all together, along with some formatting/prettifying magic, to produce this view. You can easily see your volumes, their capacity, how they’re filling up, how much physical capacity they occupy (and why), and the implied storage efficiency, in one easy table.

Let me know what you think!

Volumes, their capacities, how they’re filling up, resiliency, footprints, efficiency, all in one easy view.[/caption]

Else {
Write-Host -ForegroundColor Red "What have you done?!"
}