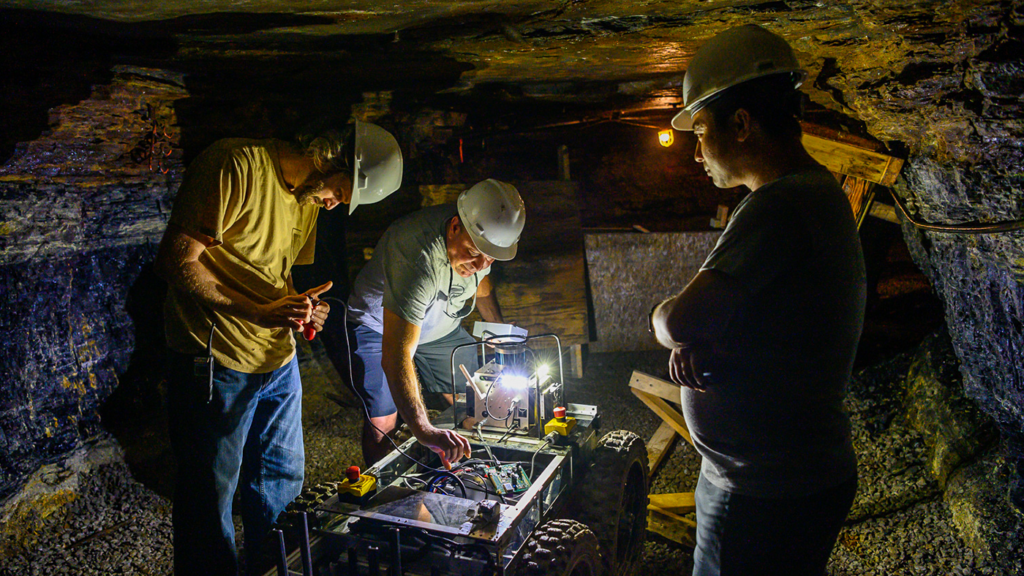 Autonomous systems have the potential to improve safety for people in dangerous jobs, particularly first responders. However, deploying these systems is a difficult task that requires extensive research and testing.

In April, we explored complexities and challenges present in the development of autonomous systems and how technologies such as AirSim provide a pragmatic way to solve these tasks. Microsoft believes that the key to building robust and safe autonomous systems is providing a system with a wide range of training experiences to properly expose it to many scenarios before it can be deployed in the real world. This ensures training is done in a meaningful way—similar to how a student might be trained to tackle complex tasks through a curriculum curated by a teacher.

With autonomous systems, first responders gain sight into the unknown

One way Microsoft trains autonomous systems is through participating in unique research opportunities focused on solving real-world challenges, like aiding first responders in hazardous scenarios. Recently, our collaborators at Carnegie Mellon University and Oregon State University, collectively named Team Explorer, demonstrated technological breakthroughs in this area during their first-place win at the first round of the DARPA Subterranean (SubT) Challenge. 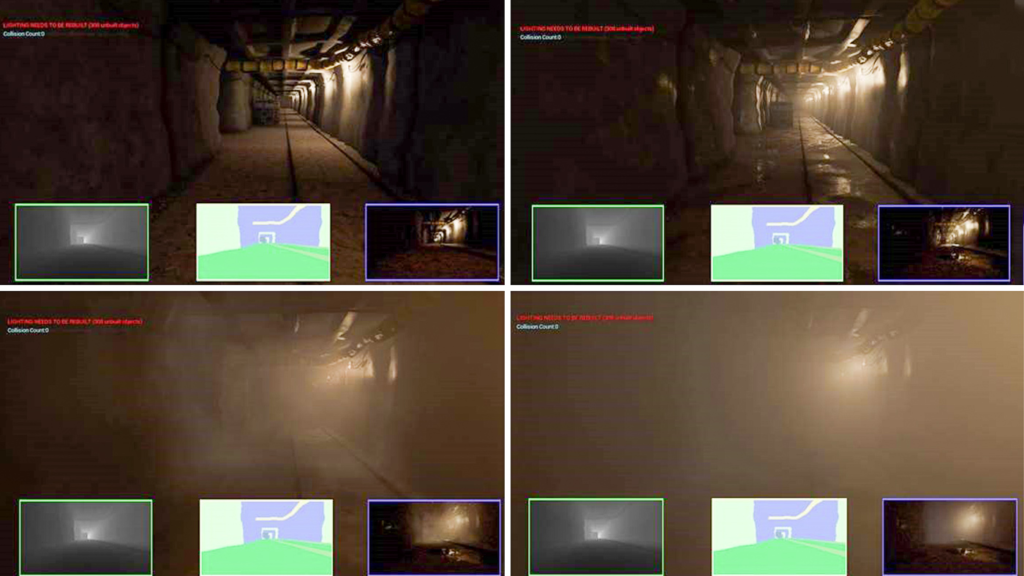 Snapshots from the AirSim simulation showing the effects of different conditions such as water vapor, dust and heavy smoke. Such variations in conditions can provide useful data when building robust autonomous systems.

The DARPA SubT Challenge aspires to further the technologies that would augment difficult operations underground. Specifically, the challenge focuses on the methods to map, navigate, and search complex underground environments. These underground environments include human-made tunnel systems, urban underground, and natural cave networks. Imagine constrained environments that are several kilometers long and structured in unique ways with regular or irregular geological topologies and patterns. Weather or other hazardous conditions, due to poor ventilation or poisonous gasses, often make first responders’ work even more dangerous.

Team Explorer engaged in autonomous search and detection of several artifacts within a man-made system of tunnels. The end-to-end solution that the team created required many different complex components to work across the challenging circuit including mobility, mapping, navigation, and detection.

Microsoft’s Autonomous Systems team worked closely with Team Explorer to provide a high-definition simulation environment to help with the challenge. The team used AirSim to create an intricate maze of man-made tunnels in a virtual world that was representative of such real-world tunnels, both in complexity as well as size. The virtual world was a hybrid synthesis, where a team of artists used reference material from real-world mines to modularly generate a network of interconnected tunnels spanning two kilometers in length spread over a large area.

Additionally, the simulation included robotic vehicles—wheeled robots as well as unmanned aerial vehicles (UAVs)—and a suite of sensors that adorned the autonomous agents. AirSim provided a rich platform that Team Explorer could use to test their methods along with generate training experiences for creating various decision-making components for the autonomous agents.

At the center of the challenge was the ability for the robots to perceive the underground terrain and discover things (such as human survivors, backpacks, cellular phones, fire extinguishers, and power drills) while adjusting to different weather and lighting conditions. Multimodal perception is important in challenging environments, as well as AirSim’s ability to simulate a wide variety of sensors, and their fusion can provide a competitive edge. One of the most important sensors is a LIDAR, and in AirSim, the physical process of generating the point clouds are carefully reconstructed in software, so the sensor used on the robot in simulation uses the same configuration parameters (such as number-of-channels, range, points-per-second, rotations-per-second, horizontal/vertical FOVs, and more) as those found on the real vehicle.

It is challenging to train perception modules based on deep learning models to detect the target objects using LIDAR point clouds and RGB cameras. While curated datasets, such as ScanNet and MS COCO, exist for more canonical applications, none exist for underground exploration applications. Creating a real dataset for underground environments is expensive because a dedicated team is needed to first deploy the robot, gather the data, and then label the captured data. Microsoft’s ability to create near-realistic autonomy pipelines in AirSim means that we can rapidly generate labeled training data for a subterranean environment.

With autonomous systems, the issues with collection data are further exacerbated for applications that involve first line responders since the collection process is itself dangerous. Such challenges were present in our collaboration with Air Shepherd and USC to help counter wildlife poaching.

The central task in this collaboration was the development of UAVs equipped with thermal infrared cameras that can ﬂy through national parks at night to search for poachers and animals. The project had several challenges, the largest of which was building such a system that requires data for both training as well as testing purposes. For example, labeling a real-world dataset, which was provided by Air Shepherd, took approximately 800 hours over the course of 6 months to complete. This produced 39,380 labeled frames and approximately 180,000 individual poacher and animal labels on those frames. This data was used to build a prototype detection system called SPOT but did not produce acceptable precision and recall values.

AirSim was then used to create a simulation, where virtual UAVs flew over virtual environments like those found in the Central African savanna at an altitude from 200 to 400 feet above ground level. The simulation took on the difficult task of detecting poachers and wildlife, both during the day and at night, and ultimately ended up increasing the precision in detection through imaging by 35.2%.

Access to simulation environments means that we have a near-infinite data generation machine, where different simulation parameters can be chosen to generate experiences at will. This capability is foundational to test and debug autonomous systems that eventually would be provably robust and certified. We continue to investigate such fuzzing and falsification framework for various AI systems.

Holistic challenges such as the DARPA SubT Challenge, and partnerships with organizations like Air Shepherd allow researchers and developers to build complete solutions that cover a wide array of research topics. There are many research challenges at the intersection of robotics, simulations, and machine intelligence that we continue to invest in our journey to build toolchains, enabling researchers and developers to build safe and useful simulations and robots.

We invite readers to explore AirSim on our GitHub repository and invest in our journey to build toolchains in collaboration with the community. The AirSim network of man-made caves environment was co-created with Team Explorer for the DARPA SubT Challenge and is publicly available for researchers and developers.