This post has been republished via RSS; it originally appeared at: Planner Blog articles.

This feature is near to my heart.  It grew out of a sample I created in the early days of Planner—it has been more than four years since Planner launched!—to get my head around the Graph API. It was also an attempt to fill a desperate need for our customers who were missing news of all the new features and changes we were making in Microsoft 365.

An example of this came from one of our enterprise customers who was very concerned about changes related to modern SharePoint sites that we introduced "without telling them."  It turned out there had been a sequence of posts about these changes in the Microsoft 365 Message center—but none of them had filtered down to the people who really needed to know!

Fast-forward to 2019, when I showed the Message center team what I'd been working on. The sample solution was built on Azure by reading the Office 365 Service Communications API and then writing to Planner with the Graph API. This resonated well with both the Message center team and the customers they showed it to. Obviously, building something for Microsoft 365 for all of our customers needs some scalability compared to my solution!

Now, after a great partnership between the Microsoft 365 and the Planner engineering teams, we are seeing the fruits of our labors: we are releasing Planner in Microsoft 365 Message center, which can create new Planner tasks for releases communicated through the Message center. This feature is now generally available to all customers worldwide.

Planner in Message center relies on Power Automate to automatically sync new messages you are interested in to Planner on a daily basis (or less frequently if you prefer). In the example below, Message center syncs with Planner once per day at 3 p.m. 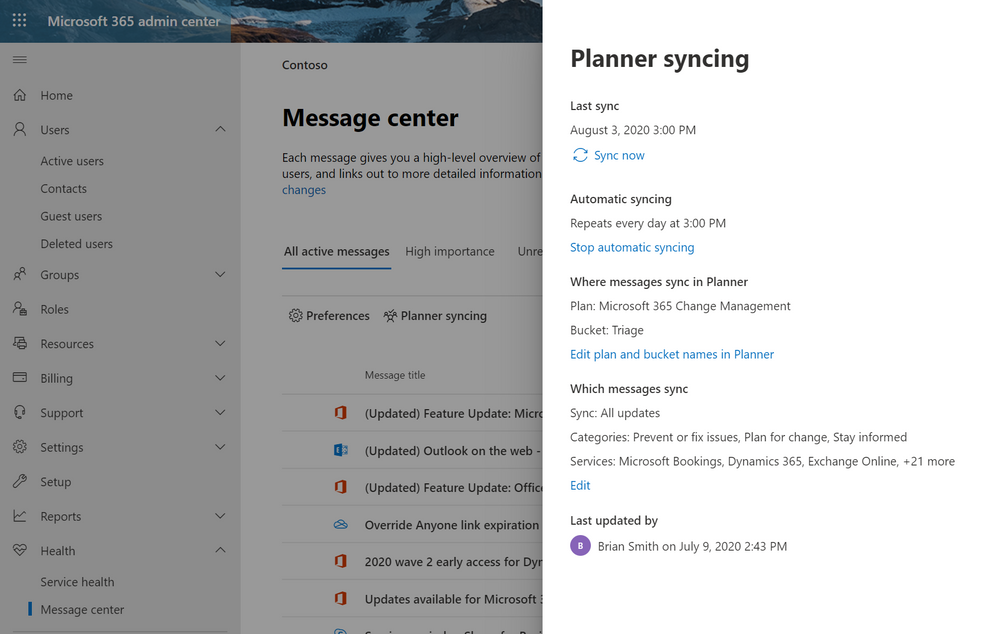 That screenshot gives you an idea of the configuration options available with this feature. You can change the Planner plan or bucket where the messages are synced and decide what kinds of messages get pulled over.

Once you have the messages in your plan, I'm thinking customers may have their own ideas on how they further manage those tasks—Planner offers the ability to have other buckets in that landing plan that tasks could be moved to and assigned for action—as well as a feature to move tasks to other plans in the same Microsoft 365 Group. For example, I might have another plan for all my Microsoft Teams messages and move them over for assignment and execution... 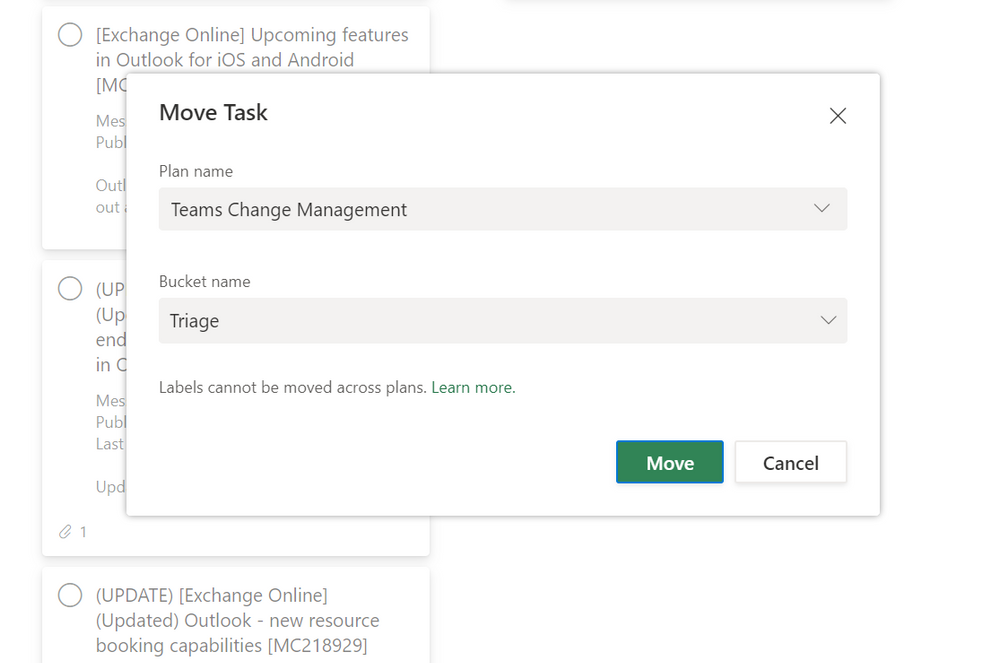 The dialog to choose a plan and bucket when moving tasks

...and assign them to be managed in another plan.

I can imagine our customers using Power Automate to further control the tasks and maybe even pushing them out to other applications, such as Azure DevOps or Microsoft Project, as there are other tools that different parts of the organizations may be using.

I'd love to hear stories of how you move this forward in your organization! Share those stories in a comment below. I also encourage you to continue leaving feedback about this and other features on UserVoice. And keep coming back to Tech Community for all the latest Planner news.

(PS, our first-ever all-digital Microsoft Ignite starts today. Head over to the Virtual Hub to check out our skilling session videos for Planner and Tasks in Microsoft 365. But first, read through this guide from my colleague, Shin-Yi, for a quick overview of all our sessions.)