Following issues have been fixed this year. SBO issues are managed in GitHub.

There are many changes in SBO from SBD. SBO is still beta. So, some may be fixed but some will remain as the difference.

Extensions such as Kinect for Small Basic and LitDev cannot be used.

In SBD, Not = "False = True; True = False;" could initialize the array Not, but in SBO, the variable Not simply contains the above string.

In Small Basic v1.2, the alpha value for opacity was specified as "#aarrggbb", but in SBO v1.0 it becomes "#rrggbbaa".

The following functions cannot be implemented in SBO (online). Writing in code will result in a syntax error of The library member'ObjXXX.MbrXXX' cannot be used in the online editor. Please download the desktop editor to use it..

The following features are not yet implemented in SBO v1.0. I can't press the button.

The following features are not yet implemented in SBO v1.0. Writing in code results in a syntax error of The library member'ObjXXX.MbrXXX' was available in older versions only, and has not been made available to this version yet..

The following properties are now read-only in SBO v1.0. Attempting to assign a value results in a syntax error Property'ObjXXX.PrpXXX' cannot be assigned to. It is ready only..

The design of the turtle has changed. Especially the size has increased.

Based on the above changes, I would like to explain the points about programming in the new Small Basic.

Make your own title

Sample program XMC184-3 below has own title. 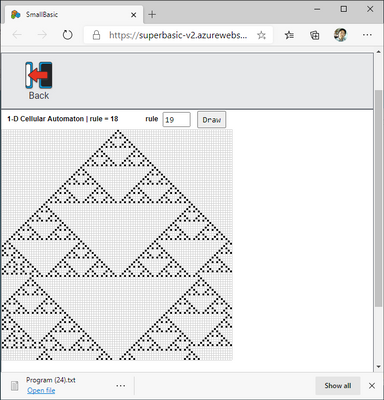 Ingenuity that does not depend on window size

Following program CVF012 will run in both SBO and SBD. 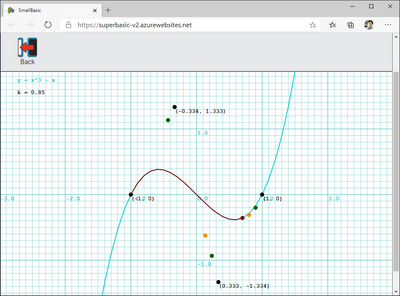 This time, as far as I know, I wrote about the changes in SBO and new programming styles based on it, but I will continue testing SBO and write a lot of programs for SBO from now on, so I will update this article as needed.  Thanks.