Monitoring Windows Security Auditing logs is essential in helping SOC analysts to keep track of any unplanned changes in a computer's system audit policy settings. If there is an indication of a suspicious anomalous activity, an investigation needs to be performed as soon as possible. Hence, the ability to analyze collected Windows Security Auditing logs efficiently in Azure Sentinel is crucial. 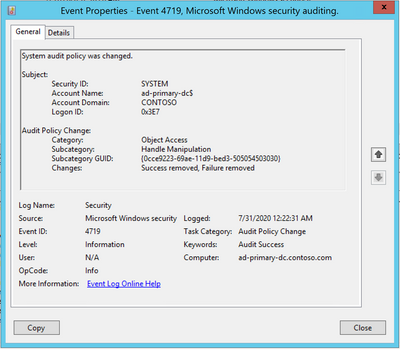 Below is how the event data would look when you query for this event in your Sentinel workspace. As you can see, the Category, Subcategory and AuditPolicyChanges fields are captured in their IDs by design instead of the text values. This might be a challenge when you need to understand more about the event or perform a filter based the string value such as “Object Access”. 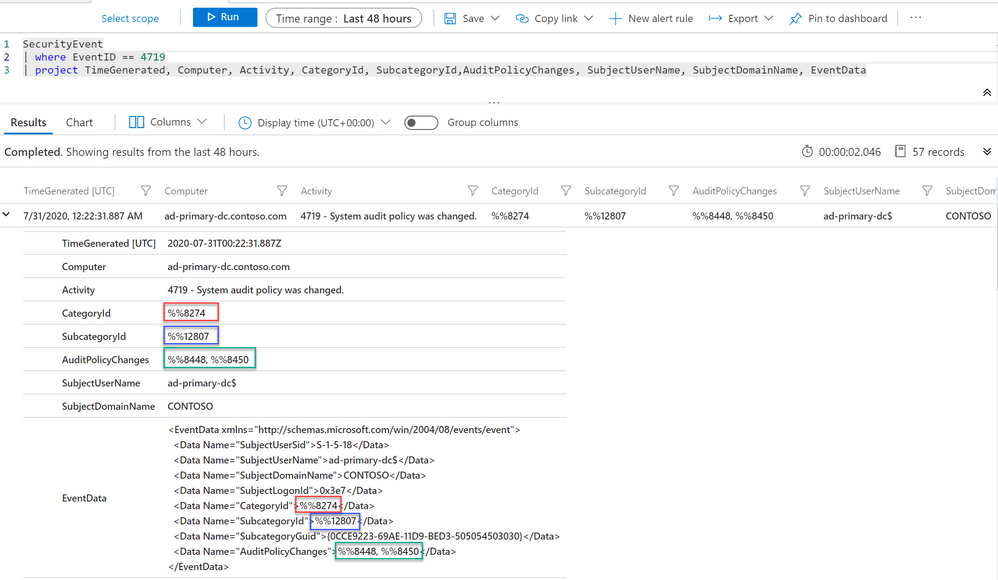 In the following sections of this blog, you will learn:

Here is the summary of what we are about to do. In the following diagram, I have lookup tables for Category, Subcategory and Changes with their values and IDs. The diagram illustrates how these IDs will be mapped to each individual table.

I will simplify the mapping process by consolidating all the values for Category, SubCategory and Changes in a single lookup table as shown in the diagram below. This will be the function body of our Parameterized Function which I will discuss in the next section. The function will return the corresponding value when provided with an ID. 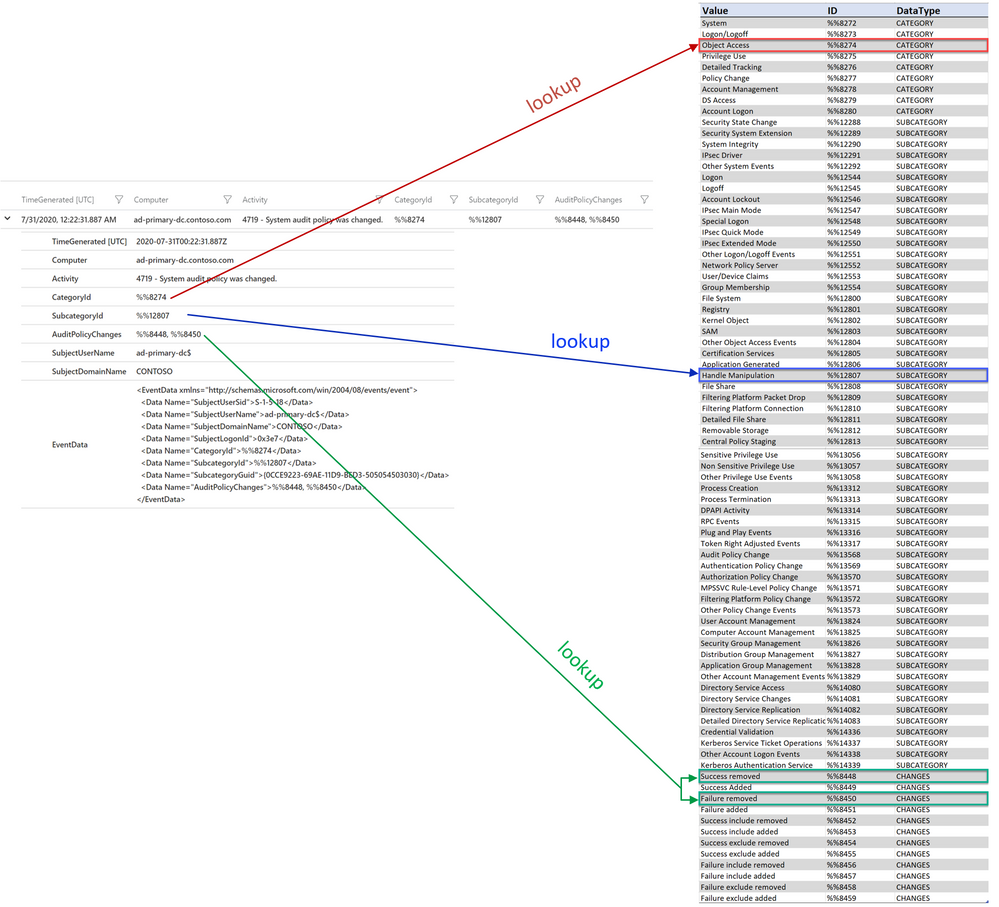 What is a Parameterized Function?

Parameterized Function is an user-defined function that can be invoked through the function alias. It accepts zero or more input arguments and produces a single output (which can be scalar or tabular) based on the function body. However, Parameterized Function is not the same as the KQL function – a common feature in Log Analytics (you can refer to this blog post for example) as the KQL function doesn’t support input arguments.

Below is an example of a Parameterized Function with a single argument (ID). The function body is a dynamic table with a list of IDs and the corresponding values. The reason of using dynamic scalar data type is to allow scalar expression when passing a column value as the argument.

Here is the example of how the function is being invoked. The function will return the lookup value of the provided ID:

Run the script after you have updated the above details. The script will prompt for your Azure credentials and it should take less than a minute to complete. Below is the sample screenshot of how a successful creation looks like:

The script will create a Parameterized Function on your defined workspace with the name and alias of “AuditEventDataLookup_Func”.

Note that the Parameterized Function is not visible in the workspace UI, but you can use API to GET the function details or List all Saved Searches (including Parameterized functions) for your workspace.

Now, let’s begin enriching the Category and Subcategory fields using the function we just created. These two fields will only have a single value and they are more straight forward. We just need to invoke the function with CategoryId/SubcategoryId as the input argument. 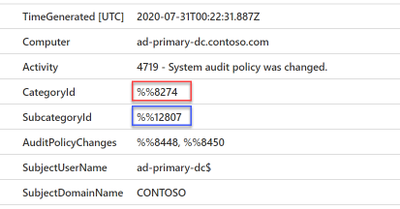 Below is the sample query:

The query results are now showing Category and Subcategory names instead of IDs as shown in the image below: 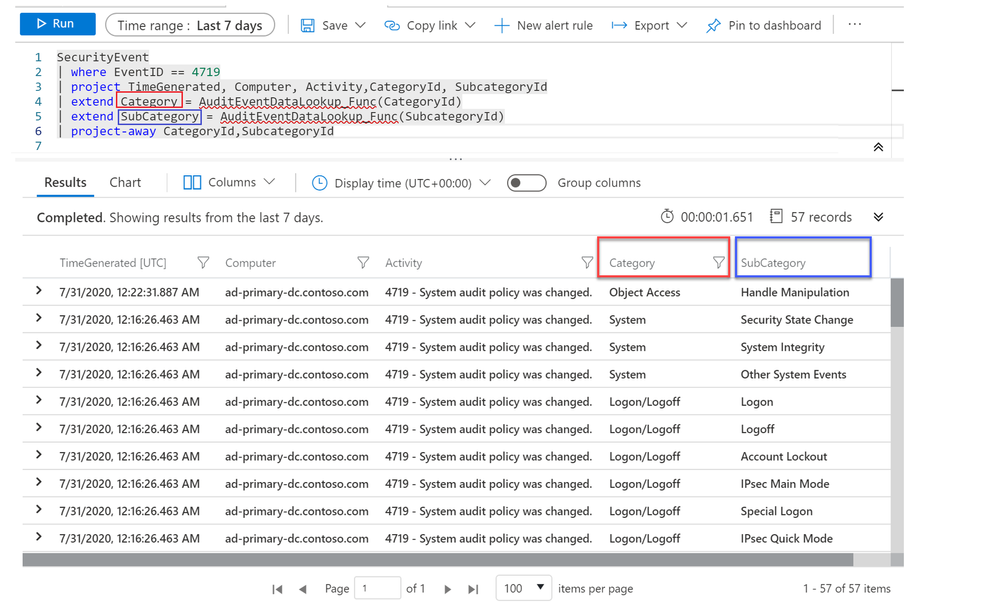 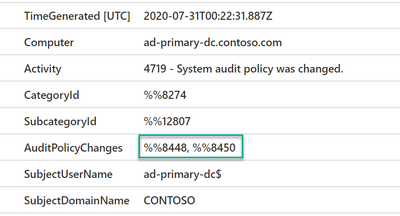 But this can be resolved with the help of a few KQL commands. First of all, we can use parse_csv() or split() command to get the string values from the comma-separated record. The returned values will be in a string array. Below is the sample query:

Below is the sample command line for removing the whitespace using trim(). Note that we are using strcat() to concatenate each AuditPolicyChange value returned by the function and separate them with a comma.

This will be an easy fix as we can use trim_end() to remove the comma at the end of the text (if any).

Below is the final query for your reference:

Now you have seen how the function works, there might be times where you need to create multiple functions for different purposes (such as enrichment, parsing, filtering and etc) and the ability to invoke another function within a function will be useful. Let me show you that in the next example.

Below is the query from the previous section and my use case is to simplify the query by configuring the yellow highlighted lines in a parameterized function called EnrichAuditEvents_Func. This function will take the table records (highlighted in blue) as the input argument (we will assign the table records to a Let() variable and passing it as an argument).

You can create the EnrichAuditEvents_Func function with the script here.

The function will return the same output results as we saw earlier, but the KQL query will be much simpler and shorter.

In summary, you have seen how we can use the Parameterized Function to perform enrichment and simplify the KQL query. I hope you find this useful and this information will help you in analyzing Windows Security Audit events more efficiently.

EnrichAuditEvents_Func - The nested function. Make sure you have deployed the above function before invoking this.

Special thanks to  ,  and  for your help.