This article is the second installment of a series on the scenario used in SAP BAPI Transactions Walkthrough, which should be read before this blog post.

The choice of in-orchestration pipeline processing over direct processing in the receive port is mostly arbitrary. It allows us to keep this presentation focused on a single place where the different stages are integrated. The orchestration is well-suited for a workflow of multiple actions and custom error handling. There are pros and cons mentioned in the literature regarding both options and it would take another post to cover them in detail.

It is worth mentioning that with in-orchestration pipelines:

- Transforms can happen before debatching, which in some cases could be a hard requirement;

- It is possible to enumerate over messages of different types;

- Failures result in exceptions being thrown rather than messages being suspended by the pipeline (see for instance Error Handling for failure behavior in the pipeline stage). The thrown exceptions can be handled in a catch block within the calling orchestration, which could allow for graceful error handling with BAPI_TRANSACTION_ROLLBACK.

Pipeline processing of messages containing batches of orders can summarized as : 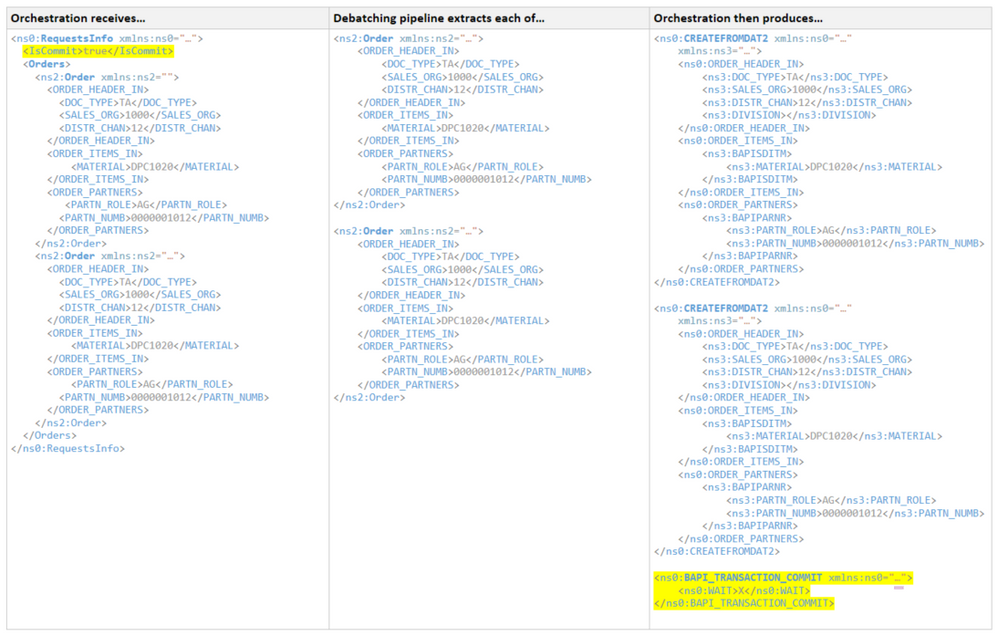 The first step for using a debatching pipeline is to define an envelope schema to represent multiple orders. This is done according to the following process, initially documented in Calling a pipeline inside an orchestration. 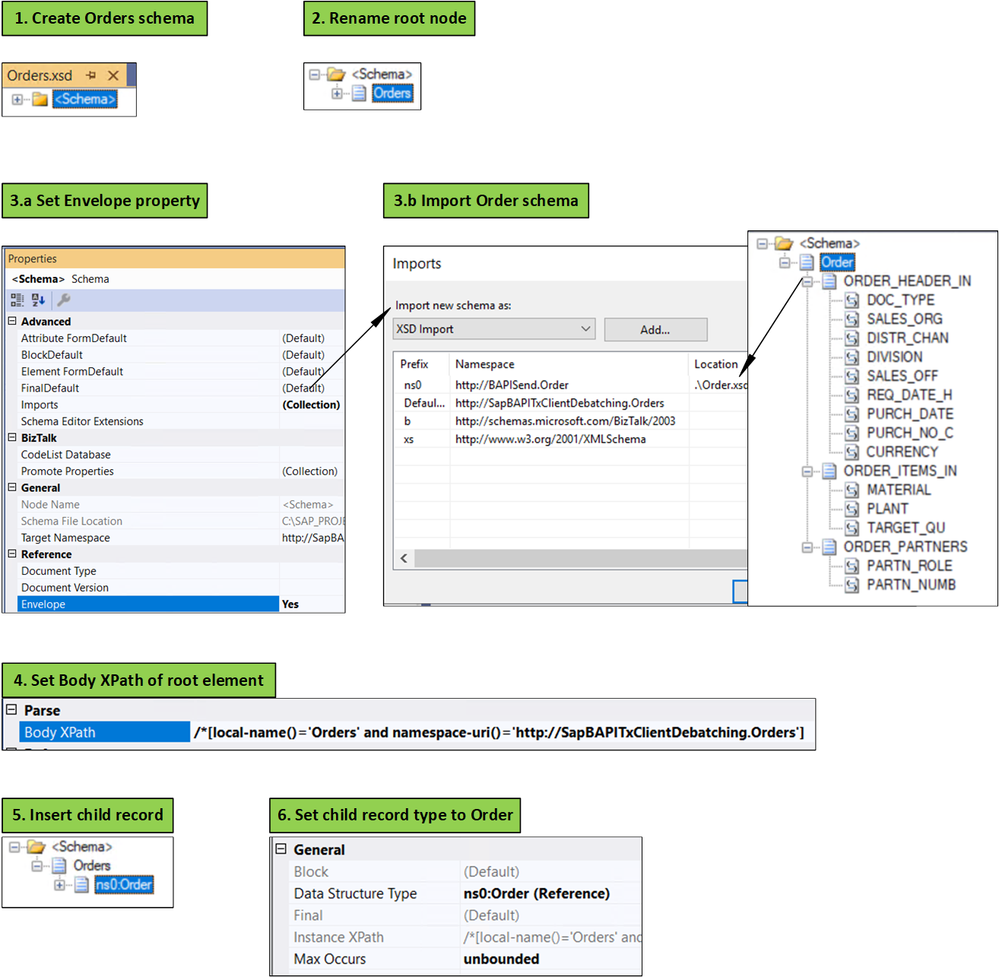 IsCommit is a promoted property which is used later on for deciding whether to commit or rollback the transaction batch. Orders corresponds to the envelope schema imported into RequestsInfo. The Orders element is extracted by a transform shape into a message called SalesOrders.

Note: the RequestsInfo schema could also be an envelope schema for Order, instead of the Orders schema.

Before using the pipeline, the following dependencies must be added to the BizTalk project:

The pipeline must be inside a scope of type Atomic because it is of non-serializable type. As a result, the orchestration has to be of type "Long running". Inside the atomic scope, the first expression starts the pipeline execution:

Inside the loop shape, a message of type Order, CurrentOrder, is assigned as follows:

The figure below shows the entire pipeline stage: 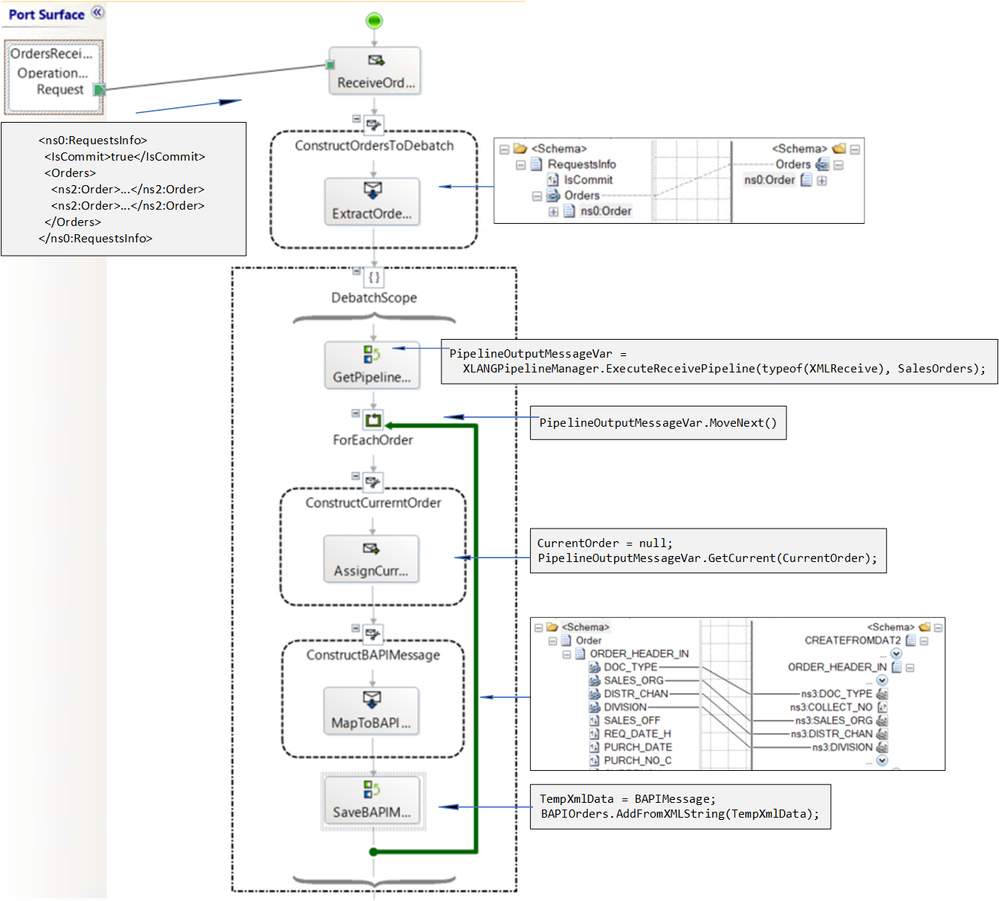 Ideally, the BAPIMessages should be sent to the SAP server from within the pipeline, by using the send-receive port connected to SAP. However, an atomic scope may not contain both the send and the corresponding receive (see a detailed explanation here); in our case, the SAP adapter port needs to be bidirectional because the orchestration needs the document id contained in the response and which is used later on to query the transactions status. To work around this limitation, BAPIMessages are saved in a list object to be used outside the pipeline scope:

where TempXmlData is a variable of type XmlDocument, and BAPIOrders is of custom type BAPIOrderList added in a helper library.

Once all Order elements have been debatched, the orchestration exits the pipeline atomic scope and iterates over the list of BAPI transaction messages to serialize and send to the send-receive port (LOBPort) connected to the SAP server. This stage is identical to Stage 2 in SAP BAPI Transactions Tutorial except that here, BAPI transaction requests are provided by the orchestration variable BAPIOrders.

Subsequent stages of the orchestration are presented in detail in SAP BAPI Transactions Tutorial. In Stage 3, the action to take (Commit/Rollback) is determined by the IsCommit promoted property mentioned earlier. 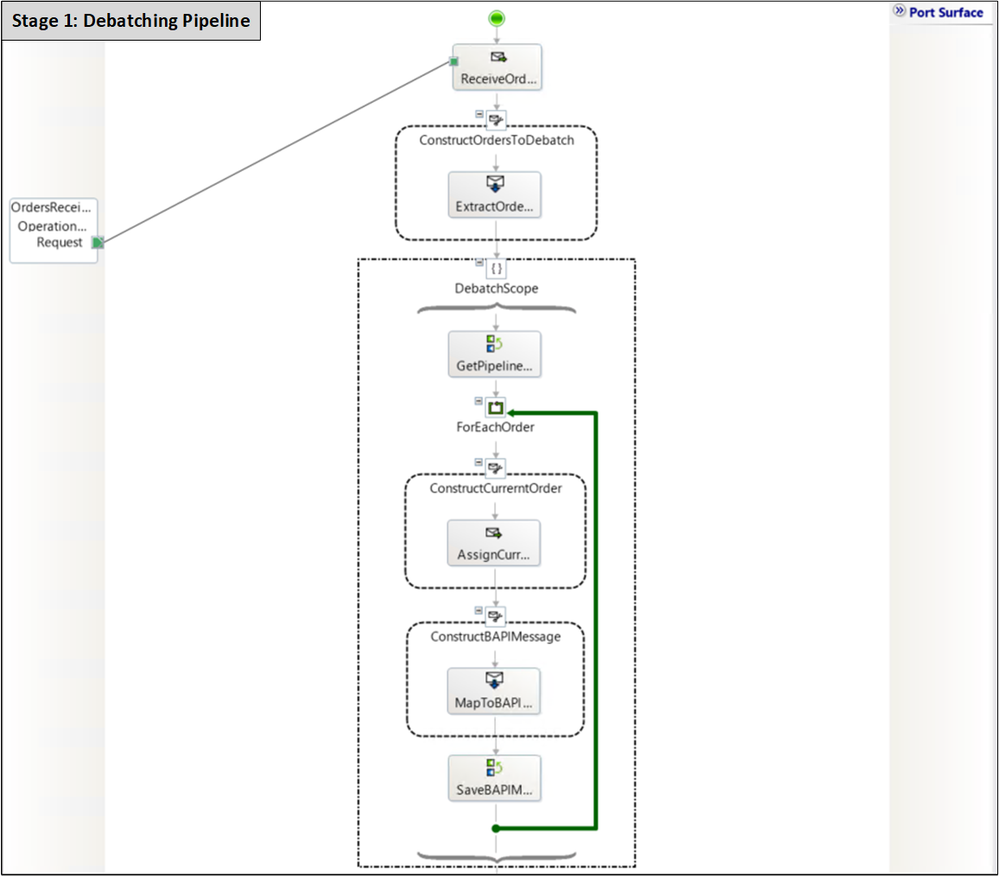 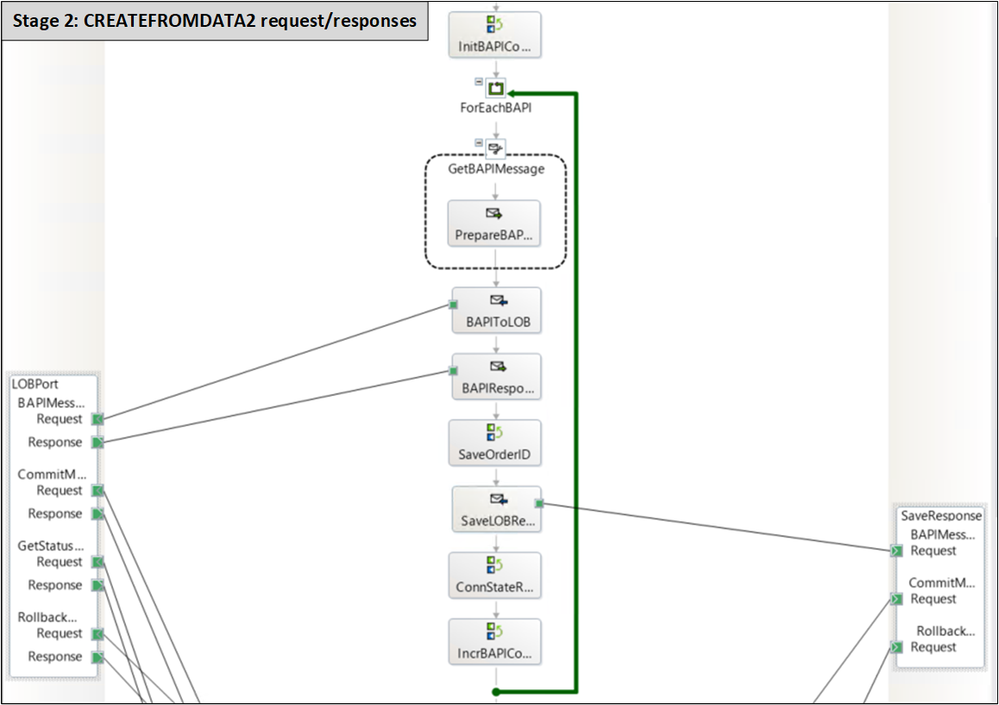 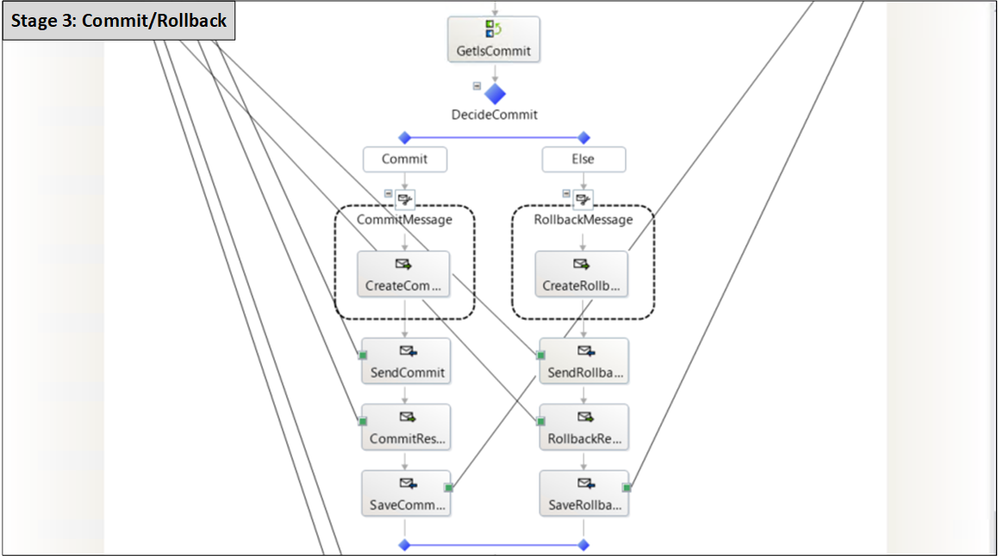 The aim of this post was to extend the BAPI tutorial scenario by showing BAPI transactions working with known BizTalk patterns such as debatching. Another pattern to consider is Scatter-Gather, of which debatching is the first step. This will be the topic of another blog post.

All code used in this article is attached.

Calling a pipeline inside an orchestration

Performance study of debatching within an orchestration

Different techniques of debatching in orchestration

How to Use Expressions to Execute Pipelines

For more general info on the SAP Adapter:

Operations on BAPIs in SAP

Get Metadata for SAP Operations in Visual Studio

Browse, search, and retrieve metadata from SAP for BAPI operations