With more and more people working from home, businesses need to provide secure printing capabilities for both at-home and the in-office workers. It is no longer predictable where workers will be when they need to print documents and it’s key to be able to support the hybrid workforce with secure printing.

With the Universal Print service in Microsoft 365 and YSoft OMNI Series™, the user can be anywhere and securely print to any existing printer from a zero trust network – whether that printer is at home or in the office.

Because it will take time for Universal Print-compatible printers to hit the market in mass, businesses need a way to take advantage of Universal Print on existing printers. That is where OMNI Series comes in. YSoft OMNI Bridge pulls print jobs from the Universal Print service within the Microsoft 365 cloud and delivers it to the printer. One OMNI Bridge can support up to 25 printers. 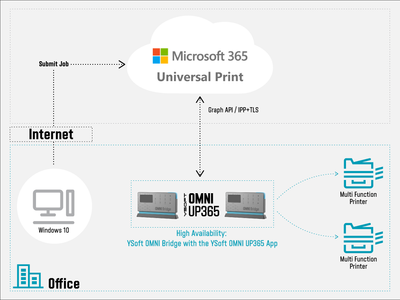 When you think about printing, it involves pulling the print job from point A (the job spooler) to point B (the printer). Regarding security, think about data transferred or stored – known as data in transit and data at rest.

OMNI Series applies the same concept of secure by default and leverages the encryption provided by Microsoft to secure both data in transit and data at rest. Print jobs are spooled and stored in Microsoft 365 and OMNI Series pulls the print job using Transport Layer Security (TLS). Security is further maintained when OMNI Series transfers the print job to a local printer using IPP over SSL.

To learn more about trying YSoft OMNI Series with Universal Print today, visit the Y Soft website and join others around the world in supporting the hybrid workforce with secure Universal Print. You can also listen to Y Soft's webcast with Alan Meeus from Microsoft on LinkedIn