This post has been republished via RSS; it originally appeared at: Excel Blog articles.

We are happy to announce that Office Scripts in Excel for the web is now generally available for all eligible users!

What is Office Scripts?

Office Scripts is an automation feature-set in Excel for the web that allows users with all levels of programming experience to automate their repetitive workflows.

To get started, use the Action Recorder to record the actions you take in Excel. These actions are then translated into a script that you can run at any time. No programming experience required! Need to modify your scripts? Use the Code Editor! It’s a TypeScript-based editor directly within Excel for the web. Use it to edit your existing scripts or to create new ones using the Office Scripts API.

Want to run a script on a schedule? Use Power Automate and create a Flow to schedule your Office Script to run at a certain time. Or maybe you want to trigger a script to run based on the creation of a new file in a SharePoint site? Power Automate also allows you to trigger scripts based on events from other applications and services to create cross-application workflows. 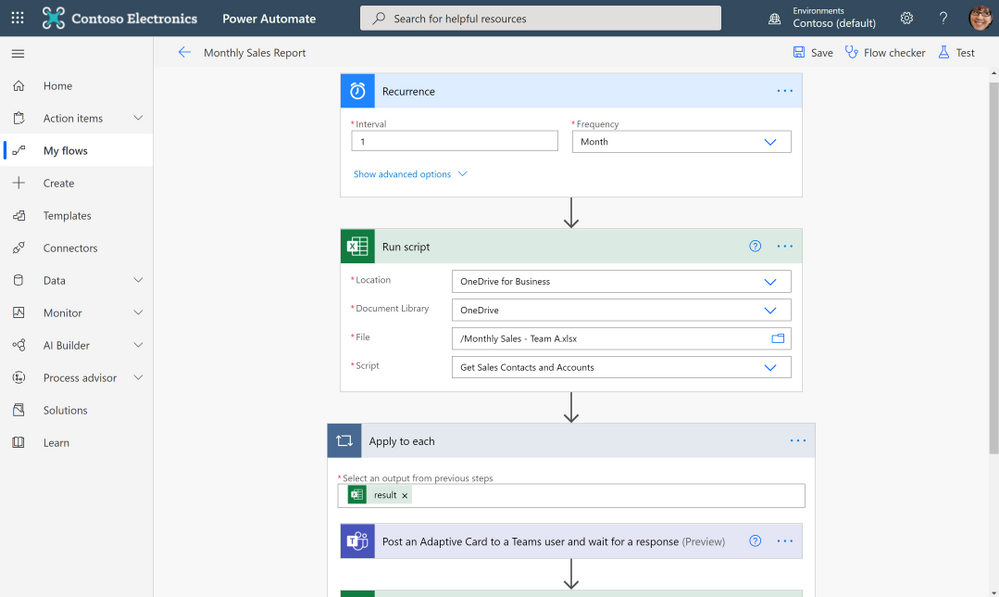 What licenses include Office Scripts?

Office Scripts is currently available for all users that have a commercial or EDU license that gives access to the Microsoft 365 office desktop apps (e.g., Office 365 E3 and E5 licenses). If you have an eligible license, you’ll find the Office Scripts feature-set in the Automate tab in the ribbon. Please note that if you do not have the Automate tab in Excel for the web, your admin may have disabled the feature.

Get started scripting with our numerous sample scripts based on real-world scenarios. These samples cover a wide variety of automated solutions from the fundamentals of the Office Scripts API to how to create cross-workbook and cross-application automated workflows with Power Automate.

You can also learn more about Office Scripts from these resources:

Learn from the Office Scripts community: