In addition to a targeted set of fixes designed to improve usability and performance, the latest release of SSMA enhances each “flavor” of the tool by adding a setting that enables users to omit SSMA extended properties in the converted code.

To leverage this setting, in SSMA, navigate to Tools > Project Settings > General > Conversion, and then under Misc, set the value of the Omit Extended Properties setting to Yes. 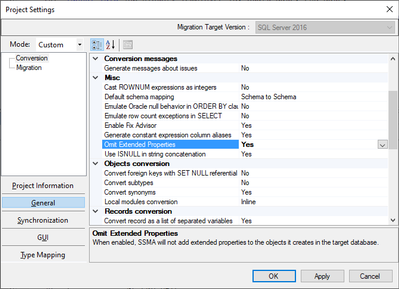 Important: SSMA v8.5 and later have been updated to require .NET Framework version 4.7.2. If you don’t already have this version installed, download and install the runtime file from here.

In addition, this release includes the following enhancements:

Source: For the list of supported sources, please review the information on the Download Center for each of the above SQL Server Migration Assistant downloads.