A new managed rule set called OWASP_3.2 has been launched in public preview on Azure WAF for Application Gateway. This rule set is based on OWASP ModSecurity Core Rule Set (CRS), which intends to protect web applications from the most common attacks, such as the OWASP Top 10. We often refer to the OWASP_3.2 rule set interchangeably with CRS 3.2.

What are the requirements to use CRS 3.2?

What changes when enabling CRS 3.2?

With the new WAF engine, you will receive the following benefits:

CRS 3.2 has several improvements in comparison to the previous CRS versions. Multiple security rules have received fixes that help lower the occurrence of false positives, and new security rules have been added to detect and protect against more threats, such as attacks against JAVA applications. For more detailed information on what changed from CRS 3.1 to CRS 3.2, you can refer to the OWASP ModSecurity Core Rule Set Version 3.2.0 change log.

The new WAF engine has been designed to allow for more flexibility, reliability, and efficiency. This engine offers improved memory utilization, latency, and throughput – which contributes to overall better performance when using Azure WAF for Application Gateway v2.

As an example, we compared the latency rates between the new WAF engine, old WAF engine, and Application Gateway v2 with no WAF enabled. Keep in mind that the examples below are findings from internal test samples, and actual performance improvement rates for customers’ resources may vary.

In the sample test below, we verified the amount of latency based on a GET request with different cookie sizes. We can see in the chart below how a request with a cookie size of 4kb with the old WAF engine resulted in a latency of above 100 milliseconds, while the latency for the same cookie size with the new WAF engine is below 50 milliseconds. The performance improvement gets even more significant when comparing to a larger cookie size, as seen with the 16kb cookie. 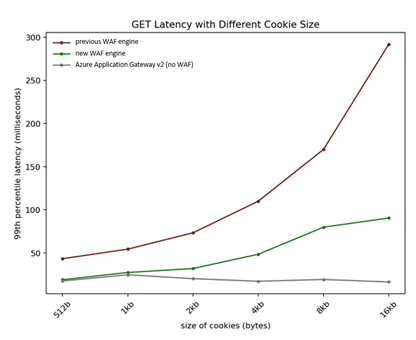 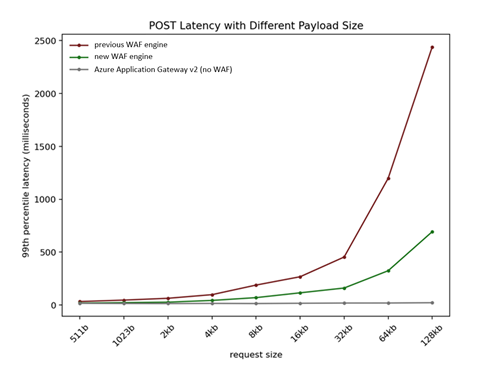