ACR connected registry is Azure Container Registry’s on-premises extension allowing customers to bring the registry and its capabilities closer to their edge devices. In this article, we will discuss how the ACR connected registry solution can simplify the management of container images in hierarchical IoT Edge deployments and enable IoT administrators to achieve unified control over the lifecycle of container images.

IoT Edge hierarchical deployment is a top-down layered deployment of IoT Edge devices enabling north-south communication between them. The lower layers on the deployment cannot communicate directly with the cloud and need to go through the layer above.

Let us consider the following example, where an image simulated temperature sensor is pushed to Azure container registry and eventually made available on the lower layer IoT Edge device. 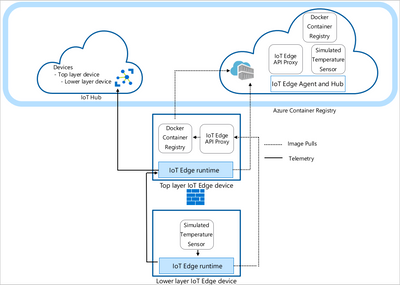 The Image is first downloaded to top layer IoT Edge device from the cloud ACR. Once available on the top layer, the deployment of lower layer IoT Edge device triggers a registry request to fetch the image from top layer. The lower layers request registry content from the parent on “/v2” endpoint. These requests from the lower layer device are routed to the registry module through the IoT Edge API proxy module. For more details on IoT Edge Hierarchical deployments, please follow the tutorial provided by Azure IoT here.

The deployment with ACR connected registry is shown below. 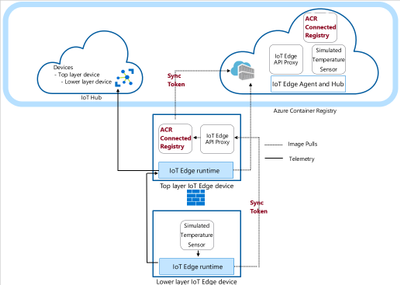 It should be noted that the ACR connected registry module plays the role of a registry intended to synchronize images with the parent and to serve the images for local usage and downstream child IoT Edge device. The synchronization can be controlled at the repository level and can be scheduled using a Cron expression.

How the ACR Connected Registry Work in IoT Edge Scenarios?

ACR Connected Registry as a Client

As a client, the ACR connected registry periodically polls the parent and looks for new content to synchronize. It handles the responsibility of updating the list of local container images and synchronizing them with the parent. The polling is http based and can be controlled using the synchronization schedule (Scheduled Synchronization of Registry Artifacts for Shipping Scenarios) for the connected registry. Along with images, the client also synchronizes authentication tokens and configuration for the connected registry module from the parent. The parent is either another IoT Edge device or the cloud ACR in the case of top-level root IoT Edge device.

Also, during the synchronization, the connected registry module posts status updates (along with locally pushed images, if ReadWrite mode is used) to the parent.

ACR Connected Registry as a Server

To conclude, ACR connected registry is an extension of Azure Container Registry allowing you to automatically synchronize updates and manage container images on Azure IoT Edge devices. It enables advanced hierarchical scenarios that are already deployed in manufacturing and other industrial settings.

To learn more about the ACR Connected Registry, please follow What is a connected registry - Azure Container Registry | Microsoft Docs

To learn how our partner Codit used the connected registry to deploy containerized applications on shipping vessels, please check their blog post How the Azure connected Container Registry Helps to Connect Vessels.