Updated 12/1:
This issue is now resolved! Google has released a fix that completed rollout to affected tenants on 11/16/2021.

We recently had a case escalation and now have a confirmed known issue for Android 11 corporate-owned work profile enrollments on Samsung devices. We’ll keep this post updated as Google and Samsung continue to investigate. Note that Google confirmed today they have been able to reproduce this issue, but we haven’t confirmed exactly which Samsung devices are affected yet.

Scenario: During the Intune corporate-owned work profile enrollment flow for Samsung devices on Android 11, the enrollment appears to hang while installing the Microsoft Intune app during the required app install step. In our repro of the issue, we’re seeing the device stay on this screen sometimes over 40 minutes. Installation will continue and successfully enroll; however, it’s taking far longer than it did before or with other device manufacturers. 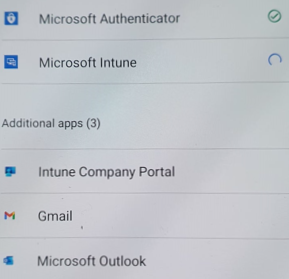