First published on TECHNET on Oct 18, 2016
Article by Kallie Bracken and Jason Messer

The containers revolution popularized by Docker has come to Windows so that developers on Windows 10 ( Anniversary Edition ) or IT Pros using Windows Server 2016 can rapidly build, test, and deploy Windows “containerized” applications!

Based on community feedback, we have made several improvements to the Windows containers networking stack to enable multi-container, multi-service application scenarios. Support for Service Discovery and the ability to create (or re-use existing) networks are at the center of the improvements that were made to bring the efficiency of Docker Compose to Windows. Docker Compose enables developers to instantly build, deploy and scale-out their “containerized” applications running in Windows containers with just a few simple commands. Developers define their application using a ‘Compose file’ to specify the services, corresponding container images, and networking infrastructure required to run their application. Service Discovery itself is a key requirement to scale-out multi-service applications using DNS-based load-balancing and we are proud to announce support for Service Discovery in the most recent versions of Windows 10 and Windows Server 2016.

Take your next step in mastering development with Windows Containers, and keep letting us know what great capabilities you would like to see next!

This post walks through the process of creating and deploying a multi-tier blog application using Docker Compose (Compose file and application shown in Figure 1).

Figure 1: The Compose File used to create the blog application, including its BlogEngine.NET front-end (the ‘web’ service) and SQL Server back-end (the ‘db’ service).[/caption]

Note: Docker Compose can be used to scale-out applications on a single host which is the scope of this post. To scale-out your ‘containerized’ application across multiple hosts, the application should be deployed on a multi-node cluster using a tool such as Docker Swarm. Look for multi-host networking support in Docker Swarm on Windows in the near future.

The first tier of the application is an ASP.NET web app, BlogEngine.NET , and the back-end tier is a database built on SQL Server Express 2014. The database is created to manage and store blog posts from different users which are subsequently displayed through the Blog Engine app.

New to Docker or Windows Containers?

This post assumes familiarity with the basics of Docker, Windows containers and ‘containerized’ ASP.NET applications. Here are some good places to start if you need to brush up on your knowledge:


Before you walk through the steps described in this post, check that your environment meets the following requirements and has the most recent versions of Docker and Windows updates installed:

NOTE : The current version of Docker Compose on Windows requires that the Docker daemon be configured to listen to a TCP socket for new connections. A Pull Request (PR) to fix for this issue is in review and will be merged soon. For now, please ensure that you do the following:

Please configure the Docker Engine by adding a “hosts” key to the daemon.json file (example shown below) following the instructions here. Be sure to restart the Docker service after making this change.


This blog application is based on the Blog Engine ASP.NET web app availably publicly here: http://www.dnbe.net/docs/ .  To follow this post and build the described application, a complete set of files is available on GitHub. Download the Blog Application files from GitHub and extract them to a location somewhere on your machine, e.g. ‘C:\build’ directory.

The top-level of the blog application source folder is the main working directory for the directions in this post. Open an elevated PowerShell session and navigate there now - e.g.
PS C:\> cd c:\build\


The database back-end Dockerfile is located in the ‘db’ sub-folder of the blog application source files and can be referenced here: The Blog Database Dockerfile . The main function of this Dockerfile is to run two scripts over the Windows Server Core base OS image to define a new database as well as the tables required by the BlogEngine.NET application.

The SQL scripts referenced by the Dockerfile to construct the blog database are included in the ‘db’ folder, and copied from host to container when the container image is created so that they can be run on the container.


The BlogEngine.NET Dockerfile is in the ‘web’ sub-folder of the blog application source files.

After running the script to obtain and configure the BlogEngine.NET web application, the Dockerfile finishes by copying the Web.config file included in the ‘web’ sub-folder to the container, to overwrite the file that was downloaded from Codeplex. The config file provided has been altered to point the ‘web’ service to the ‘db’ back-end service.


When dealing with only one or two independent containers, it is simple to use the ‘docker run’ command to create and start a container image. However, as soon as an application begins to gain complexity, perhaps by including several inter-dependent services or by deploying multiple instances of any one service, the notion of configuring and running that app “manually” becomes impractical. To simplify the definition and deployment of an application, we can use Docker Compose.

Something to note in the blog application Compose file, is that the ‘expose’ option is used in place of the ‘ports’ option for the ‘db’ service. The ‘ports’ option is analogous to using the ‘-p’ argument in a ‘docker run’ command, and specifies HOST:CONTAINER port mapping for a service. However, this ‘ports’ option specifies a specific container host port to use for the service thereby limiting the service to only one container instance since multiple instances can’t re-use the same host port. The ‘expose’ option, on the other hand, can be used to define the internal container port with a dynamic, external port selected automatically by Docker through the Windows Host Networking Service – HNS. This allows for the creation of multiple container instances to run a single service; where the ‘ports’ option requires that every container instance for a service be mapped as specified, the ‘expose’ option allows Docker Compose to handle port mapping as required for scaled-out scenarios.

The ‘networks’ key in the Compose file specifies the network to which the application services will be connected. In this case, we define the default network for all services to use as external meaning a network will not be created by Docker Compose. The ‘nat’ network referenced is the default NAT network created by the Docker Engine when Docker is originally installed.


In this step, Docker Compose is used to build the blog application. The Compose file references the Dockerfiles for the ‘web’ and ‘db’ services and uses them to build the container image for each service.

From an elevated PowerShell session, navigate to the top level of the Blog Application directory. For example,
cd C:\build\
Now use Docker Compose to build the blog application:
docker-compose build

In previous Windows Server 2016 technical previews, Windows was limited to a single NAT network per container host. While this is still technically the case, it is possible to define custom NAT networks by segmenting the default NAT network’s large, internal prefix into multiple subnets.

For instance, if the default NAT internal prefix was 172.31.211.0/20, a custom NAT network could be carved out from this prefix. The ‘networks’ section in the Compose file could be replaced with the following:
networks:
default:
driver: nat
ipam:
driver: default
config:
- subnet: 172.31.212.0/24
This would create a user-defined NAT network with a user-defined IP subnet prefix (in this case, 172.31.211.0/24). The ipam option is used to specify this custom IPAM configuration.


Now that the containers for the ‘web’ and ‘db’ services are running, the blog application can be accessed from the local container host using the internal container IP and port (80). Use the command docker inspect <web container instance> to determine this internal IP address.

To access the application, open an internet browser on the container host and navigate to the following URL: “http://<container ip>/ /BlogEngine/” appended. For instance, you might enter: http://172.16.12.216/BlogEngine

The blog application may take a moment to load, but soon your browser should present the following page. 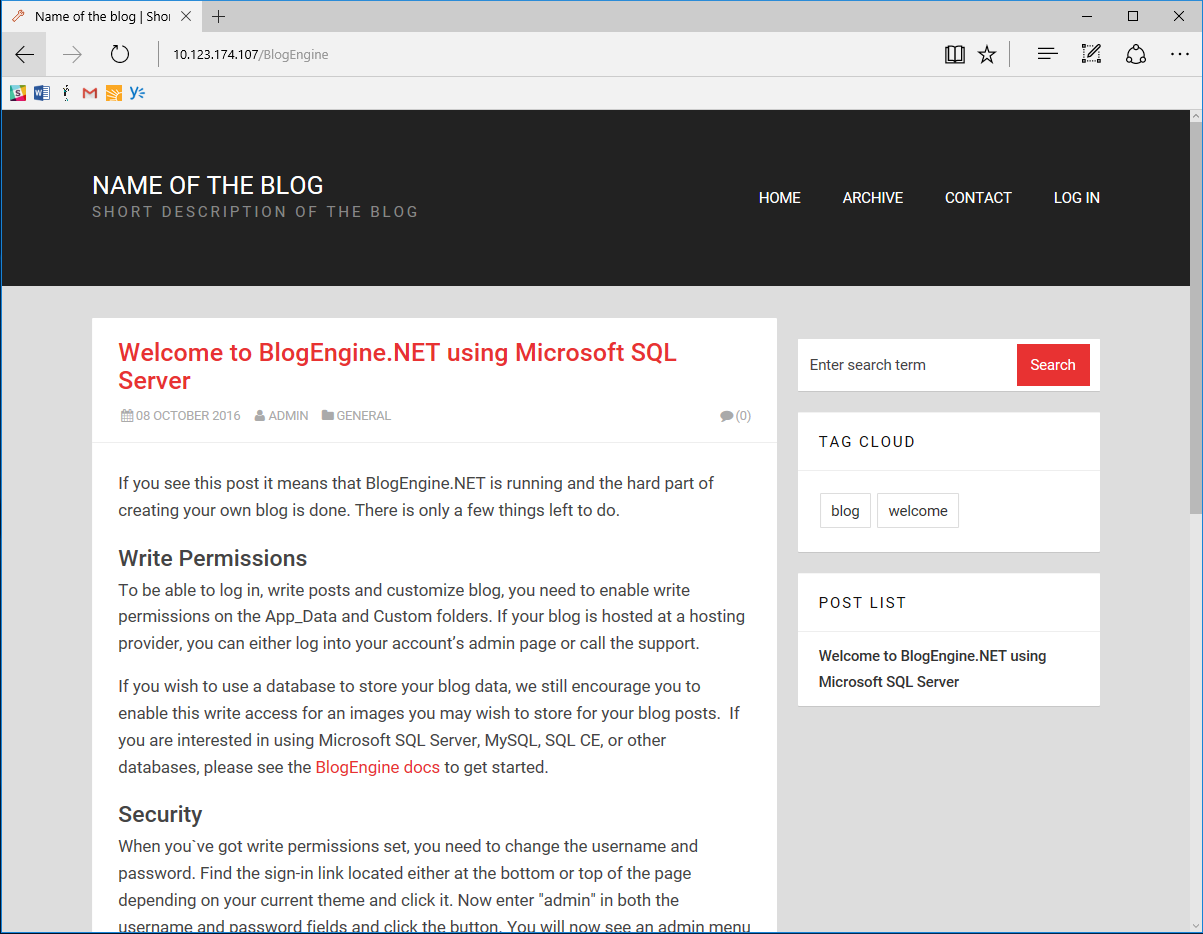 Service registration is the piece of Service Discovery that makes it possible for containers/services on a given network to discover each other by name. As a result of service registration, every application service is registered with a set of internal IP addresses for the container endpoints that are running that service. With this mapping, DNS resolution in the Docker Engine responds to any application endpoint seeking to communicate with a given service by sending a randomly ordered list of the container IP addresses associated with that service. The DNS client in the requesting container then chooses one of these IPs for container-container communication. This is referred to as DNS load-balancing.

Through DNS mapping Docker abstracts away the added complexity of managing multiple container endpoints; because of this piece of Service Discovery a single service can be treated as an atomic entity, no matter how many container instances it has running behind the scenes.

Note: For further context on Service Discovery, visit this Docker resource . However, note that Windows does not support the “-link” options. 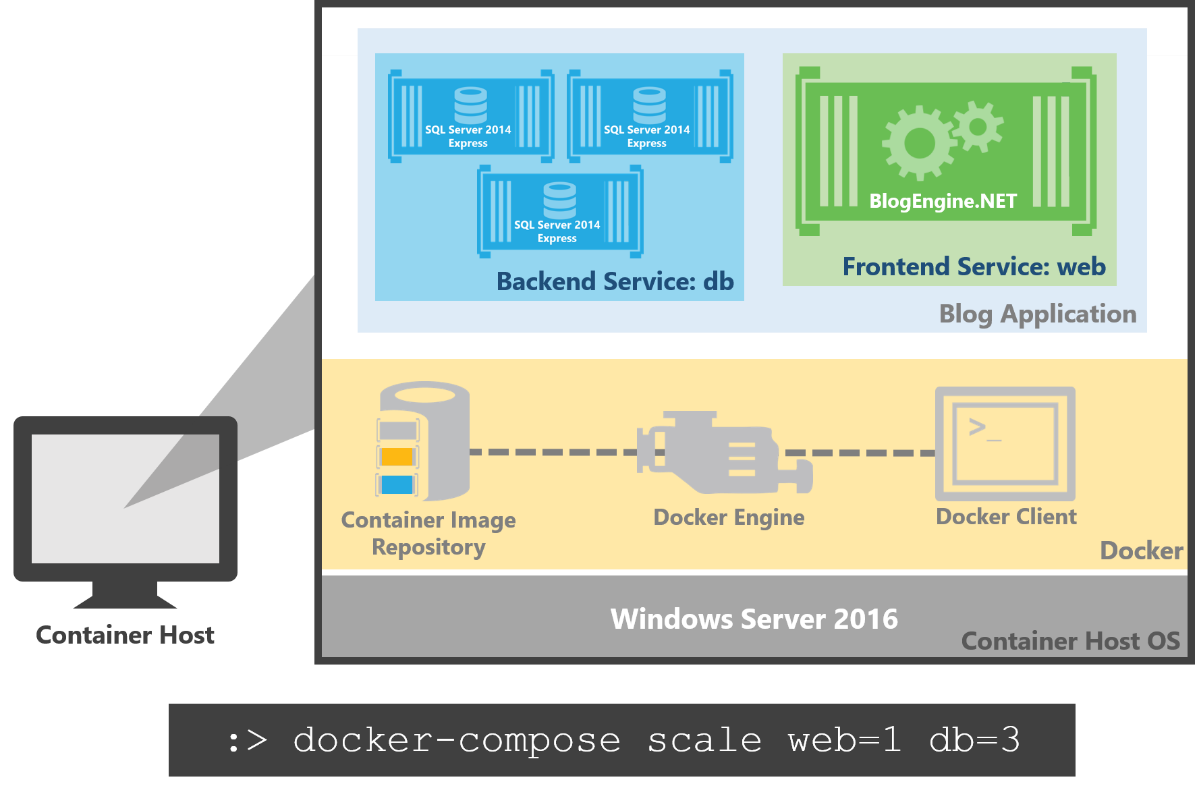 While the service registration benefit of Service Discovery is leveraged by an application even when one container instance is running for each application service, a scaled-out scenario is required for the benefit of DNS load-balancing to truly take effect.


In this step, Service Discovery will be demonstrated through a simple interaction between the ‘web’ and ‘db’ application services. The idea here is to ping different instances of the ‘db’ service to see that Service Discovery allows it to be accessed as a single service, regardless of how many container instances are implementing the service.

Before you begin: Run the blog application using the ‘docker-compose scale’ instruction described above.

Return to your PowerShell session, and run the following command to ping the ‘db’ back-end service from your web service. Notice the IP address from which you receive a reply.
docker run blogengine ping db
Now run the ping command again, and notice whether or not you receive a reply from a different IP address (i.e. a different ‘db’ container instance).*
docker run blogengine ping db
The image below demonstrates the behavior you should see—after pinging 2-3 times, you should receive replied from at least two different ‘db’ container instances: 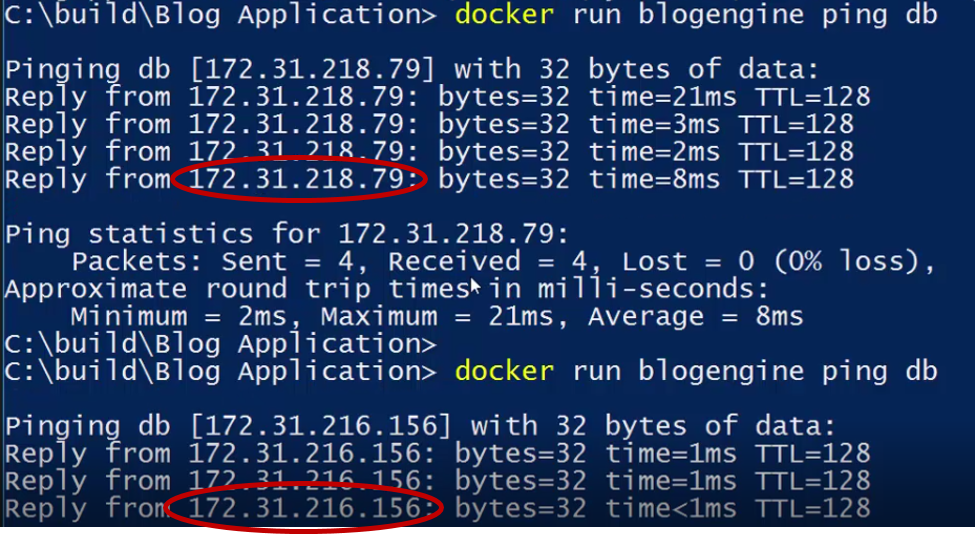 * There is a chance that Docker will return the set of IPs making up the ‘db’ service in the same order as your first request. In this case, you may not see a different IP address. Repeat the ping command until you receive a reply from a new instance.

On Linux, the Docker daemon starts a new thread in each container namespace to catch service name resolution requests. These requests are sent to the Docker engine which implements a DNS resolver and responds back to the thread in the container with the IP address/es of the container instance/s which correspond to the service name.

In Windows, service discovery is implemented differently due to the need to support both Windows Server Containers (shared Windows kernel) and Hyper-V Containers (isolated Windows kernel). Instead of starting a new thread in each container, the primary DNS server for the Container endpoint’s IP interface is set to the default gateway of the (NAT) network. A request to resolve the service name will be sent to the default gateway IP where it is caught by the Windows Host Networking Service (HNS) in the container host. The HNS service then sends the request to the Docker engine which replies with the IP address/es of the container instance/s for the service. HNS then returns the service name (DNS) query to the container.