First published on TECHNET on Sep 26, 2017
The Windows Core Networking team, along with our friends at Docker, are thrilled to announce that support for Docker's ingress routing mesh will be supported with Windows Server version 1709.

Ingress routing mesh is part of swarm mode --Docker's built-in orchestration solution for containers. Swarm mode first became available on Windows early this year , along with support for the Windows overlay network driver. With swarm mode, users have the ability to create container services and deploy them to a cluster of container hosts. With this, of course, also comes the ability to define published ports for services , so that the apps that those services are running can be accessed by endpoints outside of the swarm cluster (for example, a user might want to access a containerized web service via web browser from their laptop or phone).

To place routing mesh in context, it's useful to understand that Docker currently provides it, along with another option for publishing services with swarm mode--host mode service publishing:*


While our support for routing mesh is new with Windows Server version 1709, host mode service publishing has been supported since swarm mode was originally made available on Windows.

For example, assume you have a basic web service, defined by a container image called, web-frontend . If you wanted to publish this service to port 80 of each container and port 8080 of all of your swarm nodes, you'd create the service with a command like this:

In this case, the web app, running on a pre-configured swarm cluster along with a db backend service, might look like the app depicted below. As shown, because of routing mesh clients outside of the swarm cluster (in this example, web browsers) are able to access the web service via its published port--8080. And in fact, each client can access the web service via its published port on any swarm host ; no matter which host receives an original incoming request, that host will use routing mesh to route the request to a web container instance that can ultimately service that request. 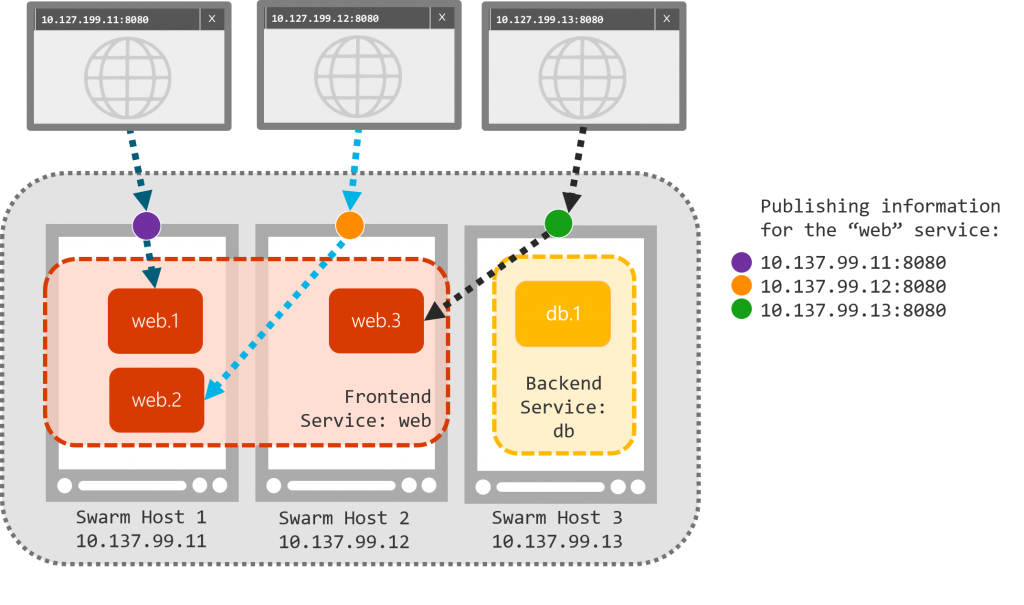 Once again, we at Microsoft and our partners at Docker are proud to make ingress mode available to you on Windows. Try it out on Windows Server version 1709, and using Docker EE Preview *, and let us know what you think! We appreciate your engagement and support in making features like routing mesh possible, and we encourage you to continue reaching out with feedback. Please provide your questions/comments/feature requests by posting issues to the Docker for Windows GitHub repo or by emailing the Windows Core Networking team directly, at sdn_feedback@microsoft.com.