When Tailwind Traders creates their first Microsoft Azure account, they receive an environment (also known as a tenant or tenancy) which contains:

From here, they will create other Azure users inside Azure Active Directory, as well as other types of identities such as service principals, and they’ll add their domain name to this directory. They might even use this directory to synchronize accounts from an existing on-premises Active Directory environment. And they’ll create Azure resources (virtual machines, storage and networking, functions, AI & machine learning applications etc.) inside their subscription.

They may also create other directories and other subscriptions, but for now we’ll keep it simple at just one of each.

Tailwind Traders always works on a “least privilege” principle – that is, all users have the lowest access rights needed to do their jobs. If someone works in a Helpdesk, they should be able to check that Azure resources are functioning and healthy, to help them troubleshoot problem calls, but they shouldn’t be able to create new resources inside Azure. In addition, some people in the Helpdesk are allowed to reset user passwords. Mapping these job functions to access requirements may be something that Tailwind Traders has already completed for their existing non-Cloud systems, that needs extending into Microsoft Azure.

Exploring the roles and their functions

Starting with access to their Azure resources, Tailwind Traders reviews which of the built-in roles will give their Helpdesk staff the appropriate level of access. A role is made up of a name and a set of permissions. Each resource contains an Access Control (Identity and Access Management) blade which lists who (user or group, service principal or managed identity) has been assigned to which role for that resource. Resources can also inherit these role-based access control settings from their parent resource group, subscription, management group, Azure policy or blueprint.

There’s also an extensive range of other, more detailed built-in roles that Tailwind Traders can use for specific resource types and work tasks. For example, the Virtual Machine Contributor can only manage Azure virtual machine resources and cannot change storage accounts. Tailwind Traders can also create their own custom roles.

For our Helpdesk scenario, Tailwind Traders will assign the Helpdesk Staff group to the Reader role.

Note: Role-based access control applies when someone tries to action a task against a resource using a method that hits the Azure Resource Manager. This does not apply to settings inside a virtual machine operating system or to application access.

Azure Active Directory has its own, unique set of roles, specific to identity and billing management. This means that Tailwind Traders can control who has permission to make changes to these tenant-wide components, without needed to grant them access to other Azure resources. There’s also a cross-over here with Microsoft 365, which uses Azure Active Directory as its Identity directory. These roles will be familiar to users of the Microsoft 365 Admin Center.

For Tailwind Traders, the built-in Helpdesk administrator role is perfect. An advantage of using a built-in role is that it is maintained by Microsoft – if a detailed permission has a name change, for example, Microsoft will update all the built-in roles that have it listed, to match. In addition, users can have both Azure roles and Azure AD roles, giving them access to user administration and to Azure resources.

For a full list of Azure AD built-in roles visit Azure AD roles or learn how to create and assign a custom role in Azure Active Directory. 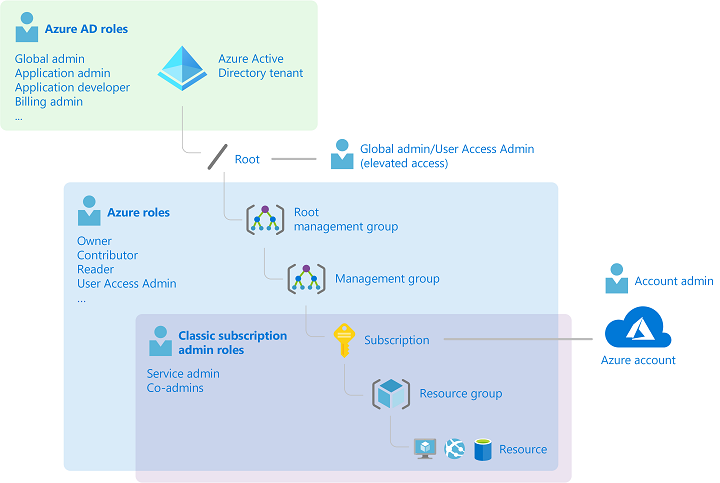 Late one night, the helpdesk gets a call that a system is unavailable. On checking, there are some monitoring alerts that point to an Azure virtual machine that is currently stopped. A quick phone call to the sleepy Level 3 support tech and “try starting it” is the suggested approach. It would be great if the Helpdesk person could start the VM but that would require access that’s greater than their current Reader role, but only for the time needed to try starting this virtual machine.

Regardless of how your organization is structured, take a look at Azure roles, Azure AD roles and Privileged Identity Management to remove widespread, high levels of access to your cloud resources and identities.