Once you've completed your Windows 365 evaluation using a trial license, you may want to purchase ongoing licenses. To ensure that your users can continue to enjoy their Windows 365 Cloud PCs without disruption, read on for some steps to help you seamlessly transition your organization from trial to paid licenses.

To move a user from a trial Windows 365 Cloud PC to a paid Windows 365 Cloud PC is an easy process. If you switch the trial license with a paid license of the same hardware specification, the change will be seamless, and your users will have an uninterrupted experience. For example: a 2 vCPU/8 GB/128 GB trial Cloud PC can be swapped with the same 2 vCPU/8 GB/128 GB paid Cloud PC without any data loss or user interruption.

If something goes wrong during this process, remember that Windows 365 offers a "grace period" option for managing Cloud PCs. Grace period allows a Cloud PC to function without interruption in case of a licensing or targeting change that would otherwise deprovision the Cloud PC. For more information, see the Windows 365 grace period documentation.

Please note that Windows 365 does not support transitioning a trial license to a paid license of a different hardware specification. Instead, you will have to manually store any data you wish to retain, deprovision the trial Cloud PC, and provision anew with the paid Cloud PC.

Transitioning from trial to paid Cloud PCs in Windows 365 Enterprise

To begin, ensure you have trial and paid licenses of the same hardware specification in Microsoft 365 admin center or in the Azure Active Directory admin center.

In this example, we have 2 vCPU/8 GB/128 GB licenses for both trial and paid. 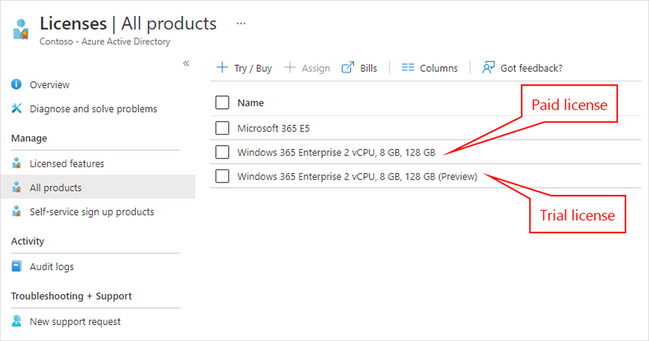 To switch the licenses shown, assign the paid licenses to the same user/groups as the trial licenses. This will result in the user having two licenses of the same spec.

Screenshot from the Azure AD admin center showing that the Windows 365 Enterprise paid license and trial license have been assigned to a user.

Now remove the trial license from the user/group assignment.

Screenshot of the confirmation prompt that appears in the Azure AD admin center when you select a license and select to remove it.

Screenshot of the same Azure AD admin center Licenses pane showing that the trial license no longer shows as being assigned to the user.

Switching to the Endpoint Manager admin center, you can see that the Cloud PC is provisioned and the user has had no interruption in service.

If the Cloud PC doesn't leave grace period and become provisioned within a few minutes, be sure the license hardware specification is the same, and the user is still targeted with the original provisioning policy. To roll back out of grace period, you can reassign the trial license.

Transitioning from trial to paid in Windows 365 Business

For Windows 365 Business, follow a similar process as above, but with some slight changes due to the different management interface. In this case, you must first assign a paid license with the same hardware specification and then remove the trial license.

In the Microsoft 365 admin center, select the user you want to transition from Windows 365 trial to paid license.

In this example, the user has been assigned a trial license. 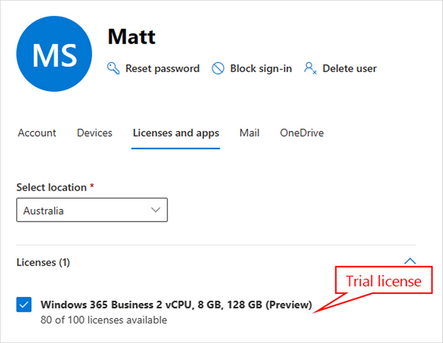 Screenshot from the Microsoft 365 admin center showing the licenses and apps assigned to a specific user. The trial license is listed under Licenses. 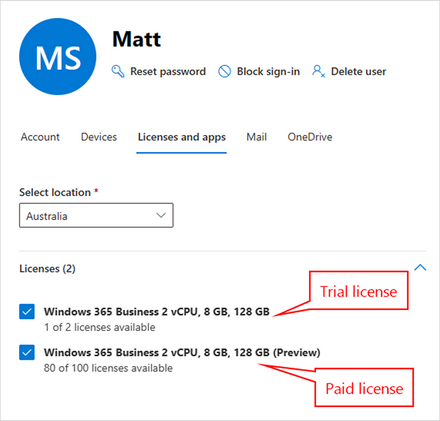 Screenshot from the Microsoft 365 admin center showing that both a Windows 365 Business trial license and paid license have been assigned to the user.

Remove the trial license and select Save changes. 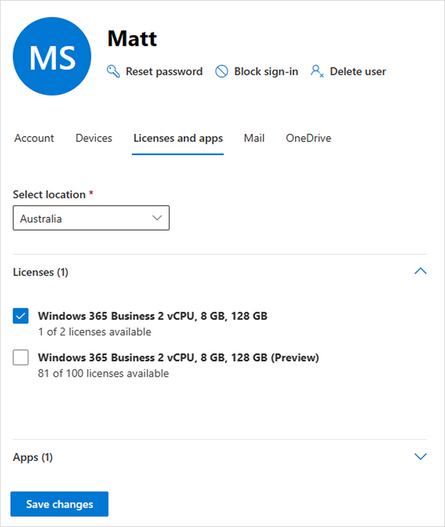 Screenshot from the Microsoft 365 admin center showing that the Windows 365 Business trial license has been deselected for the user. The Save changes button is displayed.

Your user's session will be uninterrupted and will continue to be available for them to log in. 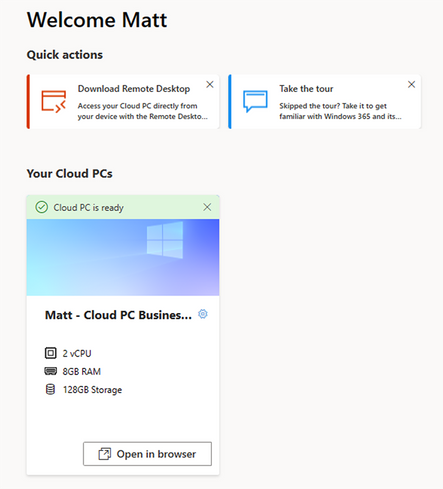 The user will have an uninterrupted experience and their Cloud PC will be ready for use.

Now that you've moved your users to paid Windows 365 licenses, you're ready to realize the full value of Windows in the cloud!