In May 2021, Microsoft announced a new threat monitoring protection for SAP systems in Microsoft Sentinel. Since then, we’ve continuously increased our out-of-the-box, predefined content, and after you’ve deployed the solution in your Microsoft Sentinel workspace, 50 different analytics rules, watchlists, and workbooks are added. In this blog we’ll go over the different features supported by our new workbooks.

The main purpose of Microsoft Sentinel workbooks for SAP is to visualize and monitor data ingested via the SAP data connector. Workbooks provide a flexible canvas for data analysis, and for the creation of rich, visual reports in your Microsoft Sentinel workspace. Workbooks help you visualize your data from your workspace logs and combine them into unified interactive experiences. The SAP workbooks include one general workbook focused on the ABAP Security Audit log, and 3 other workbooks, which are use-case oriented. These workbooks are customizable templates: edit, remove, or add any chart or visualize anything.

After deploying the SAP solution and the content hub, SAP workbooks are found in the My workbooks tab: 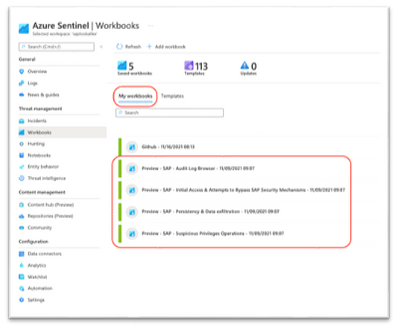 The Audit Log Browser is a workbook focused on the ABAP security audit log.
It gives users a general view about their SAP systems and helps them monitor all several aspects. Users can pick filtering parameters, such as a relevant system, or all systems, and the time scope for the workbook.

For example, the following image shows a time chart with the number of users login by bins of days.

The relevant logs are:

Users can choose parameters, such as the relevant system or systems, and the time scope for the workbook.

These actions are configured by our customers as sensitive by the relevant watchlists:

Solution workbooks include the following graphs for sensitive actions: 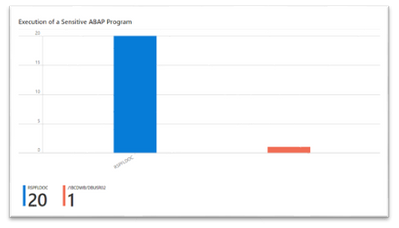 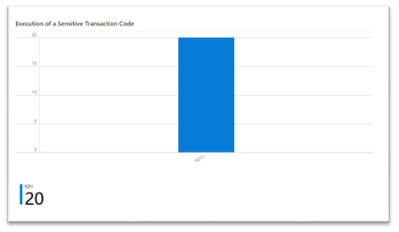 3. The third workbook is Suspicious Privileges Operations - this workbook focuses on two different use cases: Persistency and Data exfiltration.

Persistency is a broad term used to describe an attack campaign in which an intruder, or team of intruders, establishes an illicit, long-term presence on a network.

Data exfiltration occurs when malware and/or a malicious actor carries out an unauthorized data transfer from a system.

The relevant logs for this workbook are:

Users can select parameters, such as a relevant system (or all systems), and the time scope for the workbook.

This workbook includes the following graphs:

The relevant logs are: ABAP Audit Log (ABAPAuditLog_CL) and ABAP Change Docs Log (ABAPChangeDocsLog_CL).
Users can select parameters, such as the relevant system or systems, and the time scope for the workbook.

Select a user to drill down to their current activity. For example: 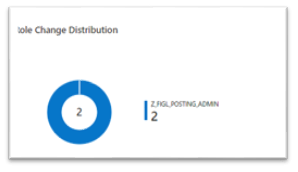