This post has been republished via RSS; it originally appeared at: Azure Database Support Blog articles.

When a snapshot isolation transaction accesses object metadata that has been modified in another concurrent transaction, it may receive this error:

In addition, any common language runtime (CLR) DDL statement are subjected to the same limitation.

In Azure SQL, snapshot isolation is enabled and the default transaction isolation level is READ COMMITTED SNAPSHOT. To check the default values, you can run the following T-SQL:

or you can check the database active options with: 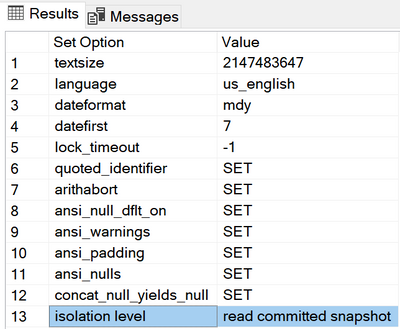 If you need to change it to read committed to resolve the error described above, check the below steps:

The behavior of READ COMMITTED depends on the  READ_COMMITTED_SNAPSHOT database option setting:

Note: Choosing a transaction isolation level does not affect the locks acquired to protect data modifications. A transaction always gets an exclusive lock on any data it modifies, and holds that lock until the transaction completes, regardless of the isolation level set for that transaction. For more details, see the Transaction Locking and Row Versioning Guide.