This post was written by Office Apps & Services MVP Peter Rising as a part of our Humans of IT Guest blogger series. Peter shares his journey with anxiety, raising a son with severe autism, and coping with working from home during the global pandemic. 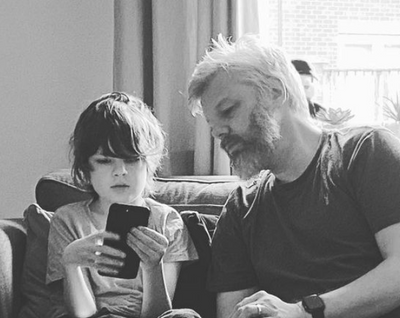 All of my life, I never quite fit in and I was never sure why.  Everything in the world seemed a little strange to me.  I didn't understand people, they were a real mystery to me.  Other children would tease me while adults would always try to get me to do something I wasn't particularly interested in.  One of my first teachers complained to my parents that I had handed a pencil to her to get my work done.  But to me, this made perfect sense.  The teacher wanted it done, and I didn't, so in my black and white brain, it was logical that she should do it.  In short, I was a loner and an introvert who wanted to do the things that interested me and nothing more.

Somehow though, after surviving the misery of my school years, I managed to start masquerading as a "normal human being" (I now know there is no such thing of course) and became employed. I quickly realized that the world was not going to adapt to me, so I had to adapt to the world.  This was very much a performance on my part though and people remained a mystery to me.

Fast forward a few years, and a lovely and beautiful lady called Louise agreed to marry me.  Our first son George was born in 2007, two years after we married. Then in 2010, Oliver was born and our little family was complete.  Oliver had challenges from very early in his life though. At just under 3 years old, he was diagnosed with extremely severe autism and sensory processing disorder. In the same week of his diagnosis, my mother passed away from a long-term illness.  Shortly after that, we were preparing to move to a new home and this is when I broke down. 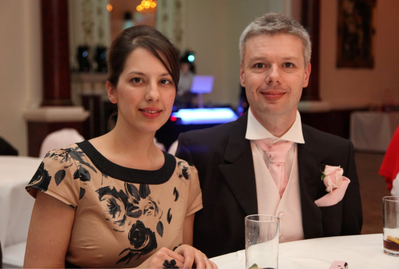 Peter and his wife Louise at his brother's wedding

I was at work as an IT Manager for a Global Manufacturing company and suddenly I just felt different.  I couldn't explain it, but I suspected at the time that I may be having a stroke. My colleagues rushed me to the hospital where it was quickly determined that I had in fact had my first panic attack.  It took me a long time to accept this and I went through every medical check imaginable over the next few months until I had to accept that the doctors were right.

Anyway, counseling and medication got me back on my feet. It was at this point in my life at the age of 41 that through my anxiety, and Oliver's autism, I finally started to understand myself as a human being.  Oliver is essentially me magnified by 1000! His autism and anxiety explained the challenges that I had always encountered fitting into the world.

In the years between then and now, we have managed to live with our challenges.  Simple things like going out for a walk in the park could be fraught with difficulties and unforeseen variables led to many trips abandoned due to Oliver's distress. Over time, we've learned, adapted, and found things that work for us.

I also found a passion in life that I had been missing.  After 20 years as an IT generalist who was pretty much strolling through my career, I began to specialize in Office 365, and just like that, my work also became my hobby.  I had never really had a hobby before.  The 6 year old boy who had handed his teacher the pencil took his first Microsoft exam (the now defunct 70-346 - Managing Office 365 Identities & Requirements to be precise) and cried tears of joy after passing. I found a drive inside of me that I never knew was there.

Anyhow, fast forward to present day, and we are obviously living in perilous times in the world.  The Covid-19 pandemic has knocked humanity off its feet and overnight the world started working from home. I was already a passionate evangelist for Microsoft 365 technologies pre Covid-19, but I truly do not know where we would be now without the amazing tools and features that are within the many Microsoft 365 subscriptions or the amazing Humans of IT who share my passion and work together in this community.

Despite these challenges, I am so proud of my family. We have adapted amazingly as you can see in the photo with Oliver below. 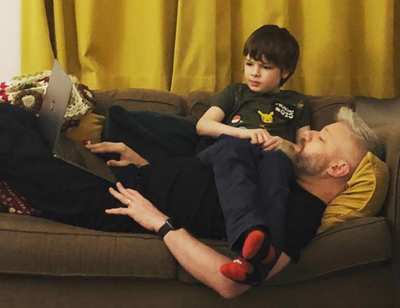 My oldest son George on the other hand is living his best life these days and is pretty much glued to his beloved PS4!  That is when we are not challenging him to do some of his school work.  Home schooling has been quite the challenge for both of our boys actually. 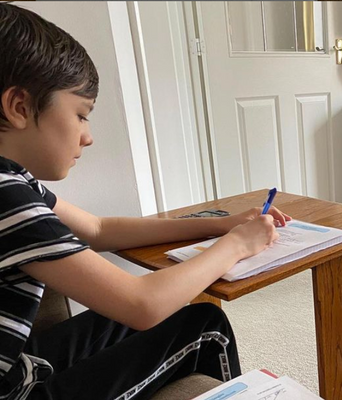 So, even though it's scary times, I'm hugely grateful for all that I have right now. My amazing family, my fantastic job, and my extended family from the amazing Microsoft community who all have their own stories to tell and I've enjoyed reading many of them. Thank you so much for allowing me to share mine.