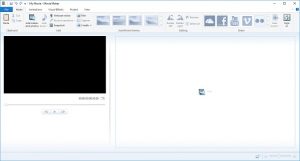 Last week, Microsoft announced the “Creative Update” for Windows 10, what many people are calling 1703, expecting the update to release in March of 2017. The announcement included hardware refreshes to the Surface Pro 4, the Surface Book, and even a new product announcement in the Surface Studio.


I have many creative-type friends who all strongly support the Mac platform. Whether it’s Garageband for music or Final Cut Pro for movies, they often believe that their OS X based computer is the only device on the market for them. Microsoft took aim squarely at those beliefs with recent announcements, including the no-specifics-given Groove Music Maker. We also learned about Paint 3D, advanced 3D model support coming to existing products like Power Point, and other revamped applications. Curiously missing from this “creative update” announcement, which never appeared, was the new UWP (Universal Windows Platform) app version of Windows Movie Maker. Although Windows Movie Maker 2012 is still available, support for it ends in January of 2017.


Microsoft teased a new version of Movie Maker last month, but has remained otherwise quiet about it. You can be sure that they wanted to include it in the recent presentation, and I’m willing to bet it wasn’t cut for time. I’m afraid this might be a bad sign for development of the app version of Movie Maker. If it isn’t far enough along that they felt comfortable even showing off a demo video of it in action, then I believe any hope of it being released before the Movie Maker 2012 expiration in January is out the Window. Although it could be a part of the Creative Update in March, I’m also afraid that Microsoft will fall back on some language we’ve heard before, and we will be told that 1703 merely “lays the ground work” for new creative apps, like the new Movie Maker (I think it’s a safe prediction, by the way, to believe that the new version will be called Groove Movie Maker, as it seems Microsoft wants to do with the “Groove” brand what it once tried to do with the “Xbox” brand), and we may not see an app available for download from the Store until Summer of 2017, if at all.


Movie Maker is definitely an underappreciated child in the Microsoft ecosystem. The push for “Creative” attention in the coming update is promising, but for now, I’m just happy that I still have that Windows Movie Maker 2012 standalone installer available.