This article discusses about the issue with custom visuals failing to load in Power BI desktop for RS and the solution to get the visuals to load.

From Power BI desktop for RS, when adding a custom visual from local file, the visual keeps loading and doesn’t show up:

The above-mentioned behavior would be encountered in one of the following scenarios:

How to load custom visuals?

Configure the Environment variable under “Advanced System settings” as shown below: 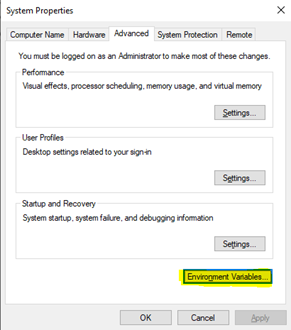 Add “PBI_userFavoriteResourcePackagesEnabled” to environment variables and set it to 0

More details about the behavior:

“DNS Lookup for "pbivisuals.powerbi.com" failed. The system reports that no network connection is available.

System.Net.Sockets.SocketException No such host is known”

Please note: Post implementing the action item of configuring the environment variable (action item 3), you might still encounter a few seconds delay before the visual gets loaded in PBI desktop. This delay is encountered because PBI desktop tries to fetch the updated copy of the visual from internet and after a retry period, displays the local copy of the custom visual after failing to connect to internet. There could be an upward of 20 – 30 second delay.