To register a logic app consumption as an API in Azure API management service, we have a built in functionality to ‘Create from Azure Resource’ which directly lists all the Logic Apps which can be registered as an API.

The pre-requisite being Logic App should have a callable HTTP endpoint, that means, a request trigger. 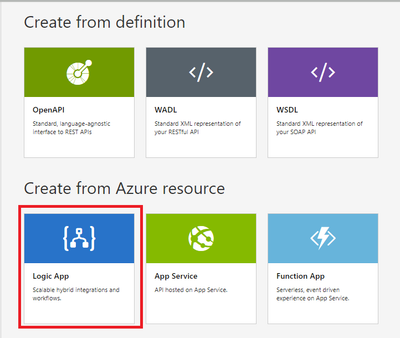 Clicking on the option, you will be able to browse and select from all the logic apps which have a Request Trigger.

Same functionality is not available for workflows in Logic App standard yet.

However, we can manually register the Request trigger URL from workflows as a blank API in APIM service.

We will need to divide the Request URL into two parts to put into the backend and frontend.

For example – this request URL –

Can be broken into two segments -

Steps -
1. We need to put the first part into the backend HTTP(s) endpoint by clicking on highlighted parted as portrayed below

2. Select target as HTTP(s) endpoint and click on override and provide the first part of your request URL as depicted in the screenshot.

This method is useful for both Logic App Consumption and Standard Logic App Workflows.