Recently, when our team participated in an internal Microsoft Hackathon for Smart and Sustainable Building Solutions, we realized we had an opportunity to tie in a very exciting project we had been working on with an NFL Football Stadium organization. We decided to focus our efforts on a mutual area of interest - in driving sustainability and recycling efforts within the stadium complex – especially during NFL games.

With that in mind, we ran with the concept of Re-Cycling Gamification, and how we could engage the sports fans to help drive re-cycling and sustainability efforts within the stadium complex.   Before we get into our solution, let’s take a moment to understand the difference between Single-Stream vs Multi-Stream Re-cycling.

Single stream refers to the process of processing “mixed” recycling materials, including glass, paper, plastic, and metal.  In this process, everything is combined into one stream of recyclables and will require extensive sorting and processing before the materials eventually wind-up in the correct categories. Most consumers today are familiar with this concept – and participate in weekly household re-cycling efforts.

For most recycling facilities, this means they are required to pick up re-cycle bins from consumers’ homes or offices.  Today, this is seen as a “preferred” method for consumers - who don’t have the time or the desire to sort by category of material.

Once collected, the mixed materials are brought to the material recycling facility, where they are then pre-sorted by facility employees and loaded onto industrial vibration equipment that is designed to further separate the materials by weight and size.

Most recycling programs in the United States are now single stream.

Between 2005 and 2014, these programs went from covering 29 percent of American communities to 80 percent, according to a survey conducted by the American Forest and Paper Association.

The popularity of single-stream re-cycling has become “mainstream” today – especially given that is convenient and a full 66 percent of people surveyed by a Harris Poll last October said that they wouldn’t recycle at all - if it wasn’t easy to do.

But, Re-cycling Efforts Today - They are a Changing…

Multi-stream recycling is a collection method in which waste generators (humans) are required to separate their recyclables into multiple separate bins at the time of disposal.

The specific bin categories may vary depending upon the types of materials that are being targeted for the re-cycling efforts. Typical categories might include Paper, Plastic, Aluminum, Metal, or Compostable Waste.

This appeared to be a great idea for several other reasons:

The premise for this solution was rather simple:

The team gathered various training images that were used as the basis for the initial iterations of the custom vision model and were pre-sorted by the following categories – so that the images could be tagged appropriately:

The graphic below illustrates the high-level architecture for the solution. This project was constructed during the hackathon and has a working demo to help prove the viability as well. 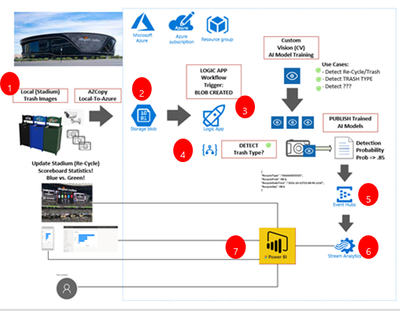 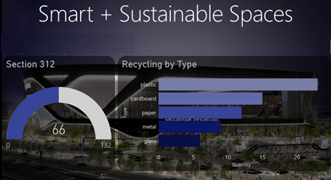 As part of the team’s efforts to raise awareness around sustainability and re-cycling efforts, they gathered an interesting set of “Did You Know” facts to help provide “Edutainment” for the fans to help drive sustainability efforts within the stadium complex.

Below are sample “Did You Know” facts: 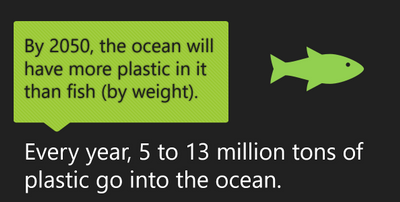 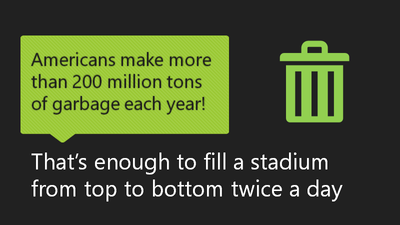 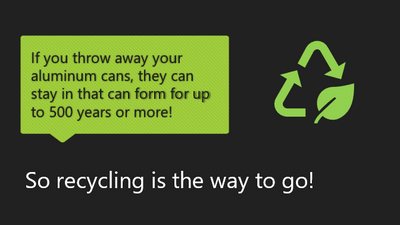