@popliu and I are thrilled to be introducing a new Microsoft open-source project: Azure Key Vault and Managed HSM engine, which is compatible with OpenSSL.

At a high level, the workflow is described in the diagram below. 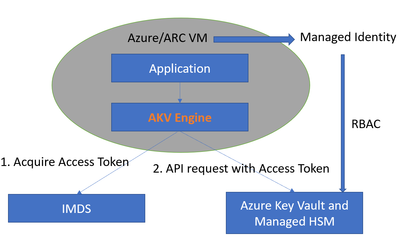 The workflow has two parts:

The value from the third, fourth, and fifth sections will be used to generate the restful API URL to access the Azure Key Vault or Managed HSM.

For example, the engine string

will generate the RESTful API URL

For the engine, an important user scenario is ‘Keyless TLS.’ Keyless TLS is a model where the TLS private key (either RSA or EC) is stored in either Azure Key Vault or Managed HSM.​ The web service no longer keeps the private key on the server. This enables a customer to deploy this service to any server in the cloud but use the private key stored in the key vault or managed HSM owned by the customer.

In summary, for customers who are developing Keyless TLS applications in Azure, this engine provides a lot of benefits:

Stay tuned for future posts, where we can explore integration with Azure DevOps, gRPC, and EC keys. The team welcomes contributions to the projects via the Microsoft Open Source Github.