In collaboration with Wagner Silveira

There are a few things to consider when deploying Azure connectors (managed connectors).

In case of consumption logic app, this is implemented internally (Being a shared cloud service, Logic App’s service principal has these permissions to read connection secrets).

Whereas in the case of standard logic app, as runtime is hosted in customer’s environment, there is a need to explicitly add an access policy at Azure connection to add permissions for System assigned managed identity of Logic App.

To achieve this, in the Logic app ARM template we would be creating system managed identity for logic app, input this identity value to Connection creation ARM template and add access policy.

Please refer to the diagram below and the reference article for more details on these concepts. 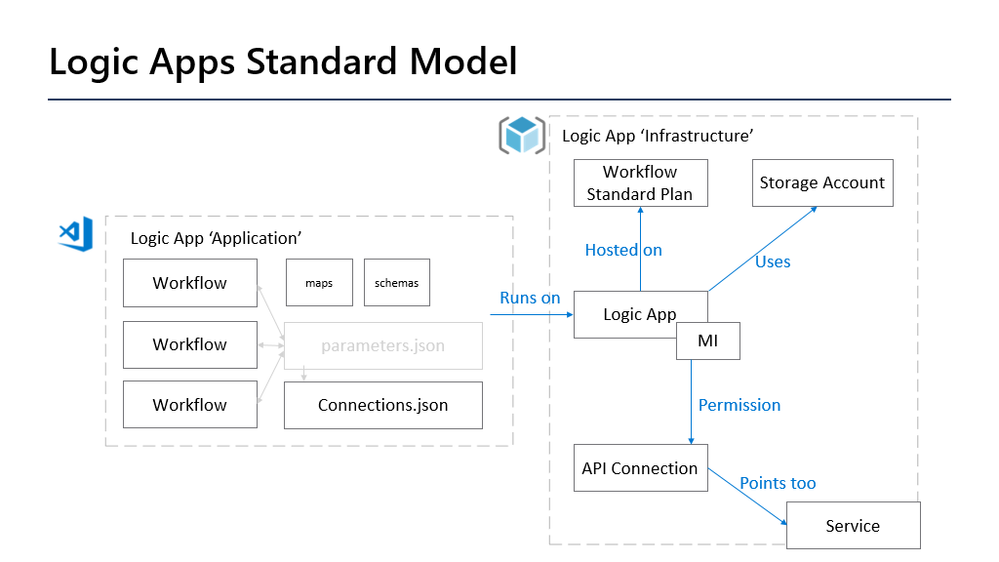 Based on the above considerations, please find below the detailed steps for deploying a logic app and its workflows with all three types of connections (built-in/service provider connections, Azure connections and function connections).

In this template we add Logic app infrastructure resource and all the dependent resources like Storage Account, Application Insight, App service plan and VNET configurations. In this step we:

In this template, we would add Azure connection resources. This template would take inputs from the previous template and use them to create access policy for Logic App’s managed identity. In this step we:

Once both templates (Logic app infrastructure and Connections) are ready, create a DevOps pipeline to deploy these resources to Azure and to update app settings.

Define a DevOps pipeline that include the steps below:

In this step, we would create a ZIP package of the workflows folder, based on the source code repository. For example, you can push your VSCode project to source control and trigger a run of this pipeline whenever there is any commit to the project.

Please note that the changes below are required in the connections.json file.

Please refer to the code snippet below for more details.

In this step, we would create a pipeline to deploy the zip package created in the previous step. During this step we update the app settings for all the app settings parameters used in the Connections.json file, so they can be found during runtime.

Create a DevOps pipeline to include the steps below

In this example, I am using two workflows with an azure connection, a service provider connection and a function connection.

Create an Azure DevOps project and create a service connection for your Azure subscription.

Update the service connection name, resource group and LA name in the variables.yaml and the TODO sections in the pipeline yaml files.

Run the pipelines one by one, verify that the logic app, connections, and workflows are deployed.