We recently came across a case where blocking was being observed when performing a DDL operation, while querying system views concurrently. However, performing the same query with a different user was not triggering the same blocking pattern. In this article, we will reproduce the same steps and briefly go through the reason why specific user roles may avoid blocking in certain scenarios.

Setting Up the Stage

To reproduce this scenario, we just need to create a table and two users: one will be part of the db_datawriter role with ALTER permission on the respective table, and the other have the db_owner role assigned. We begin by creating the respective logins on the master database:

Then we create the table, the users and assign the respective roles / permissions:

We will be starting by truncating the table we have previously created, leaving the transaction deliberately opened, to facilitate reproducing the behavior. Keep in mind that, the execution of this query can be made by either of the users we have created.

With the same user, we will open a new session and query information from tables, schemas and objects system views:

When we execute the second query with the writer user, we verify that it gets blocked: 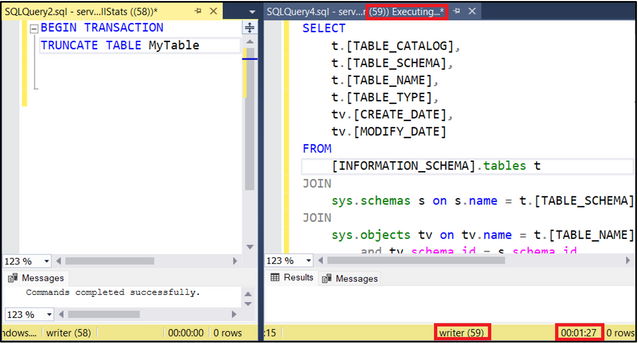 We can use the query below to obtain more information about this blocking event:

And we can confirm that the operation gets blocked when trying to acquire a schema stability lock. The query accesses the metadata, but the truncate operation is holding the lock for the system table, so the second query is not able to access the respective information.

However, if we execute the latter query using the owner user, we will confirm that the second query will not get blocked, and results will be immediately presented: 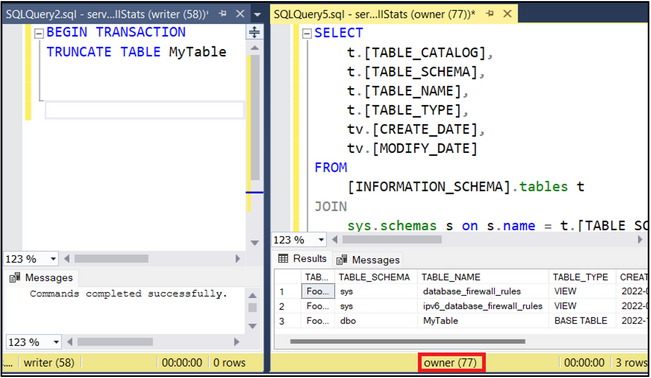 So, why did blocking occur in the first case? Basically, the truncate query causes the schema of the respective table to be locked while all extents are deallocated. Meanwhile, the second query is executed and will have to wait while the lock from the first query is held, so then SQL can check if the user has the necessary permissions to perform the operation.

The only question left is, why the same query was not blocked when executed by the db_owner user? The simple reason is that, for certain user roles, permission checks can be bypassed. This behavior is by design and is documented here - point number one of “General steps of the algorithm”.

To minimize the occurrences of such blocking events, and since assigning roles with higher permissions may not be appropriate due to security reasons, it should be considered the possibility of separating both operations to avoid that they execute concurrently.