We're aware that customers have run into issues with the current backup and restore behavior for their supervised iOS/iPadOS devices, such as apps not downloading. To fix these issues and improve the user experience, Intune will prevent the iCloud backup of certain managed applications (apps) on supervised iOS/iPadOS devices. This change is expected to occur with the January (2301) service-side release.

With this change, Intune will no longer be backing up managed App Store apps and line-of-business (LOB) apps on supervised iOS/iPadOS devices, for both user and device licensed VPP/non-VPP apps. This will include both new and existing App Store/LOB apps sent with and without VPP that are being added to Intune and targeted to users and devices. Preventing the backup of the specified managed apps will ensure that these apps can be properly deployed via Intune when the device is enrolled and restored from backup. With this upcoming change, managed apps can and will be re-installed for supervised devices, but Intune will no longer allow them to be backed up.

Note: While we don't expect managed apps on supervised devices to backup data to iCloud, please note that data saved locally for managed apps may not be available after a backup and restore.

For newly enrolled devices, no managed App Store apps (sent with/without VPP) or LOB apps will be backed up to iCloud. This includes both required and available apps. These apps will be automatically re-configured for all devices once this change is implemented.

For existing devices, the new behavior will be automatically updated for all App Store/LOB apps. This includes both required and available apps. However, depending on the app’s configurations and licensing, a sync between Intune and the device may be needed.

The following table explains the different apps behavior on the device after it’s been restored:

Checking if an app is backed up by iCloud

Figure 5: A screenshot of the Backup Details on the user device showing apps that are backed up with the indicator switch in green and apps that are not backed up greyed out with the text “Backup Not Supported.” 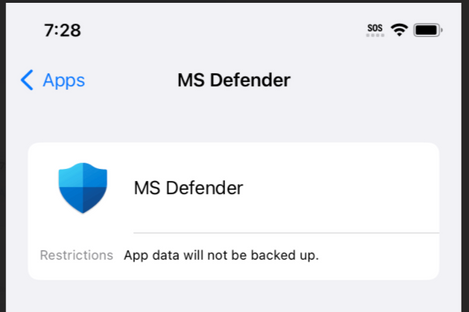 Figure 6: Screenshot of restriction text indicating that an app is not backed up to iCloud.

We understand there may be nuanced scenarios where you may want to allow configured managed apps to be backed up to iCloud (same as the current behavior). We’re planning in a future release to introduce a setting within Intune that will allow you to turn this new behavior off, if needed.

If you have questions or comments for the Intune team, reply to this post or reach out to @IntuneSuppTeam on Twitter.