This blog will demonstrate a real-world customer example of scaling out Microsoft SQL Server TempDB data files across multiple data disks in a Windows Azure Virtual Machine. While this focuses on TempDB, the concepts are the same for scaling out writes to SQL Server data files (MDF / NDF) of other databases as well .


The customer solution was written with READ COMMITTED SNAPSHOT ISOLATION enabled on the user database, thus the TempDB throughput was very high due to SQL Server maintaining the version store in the TempDB database. We knew we had some database and query tuning to do in order to decrease the lock contention, but before we did that, we took this as a good opportunity to do some TempDB scale-out testing and grab some performance results.


We started out with standard SQL Server best practices for TempDB (multiple data files, pre-size data files to the same size, etc.). Azure CAT's Cindy Gross does a great job of outlining these here: http://blogs.msdn.com/b/cindygross/archive/2009/11/20/compilation-of-sql-server-tempdb-io-best-practices.aspx . We asked 5 DBAs how many data files to create for TempDB and we got 7 different answers ;-), so we settled on 8 data files; 1 data file for each CPU core on the system. This is consistent with the recommendations in the KB article 2154845, “ Recommendations to reduce allocation contention in SQL Server tempdb database ”. This also mitigated the PFS (Page Free Space) allocation contention that we saw early in testing. I’ve included links to other good references on TempDB performance tuning in the References section at the end of this post, so we will not rehash all of the TempDB recommendations here.


One Data Disk:
We initially put all 8 data files on a single data disk (with the transaction log on its own data drive). This gave us the following write throughput to the data files drive during load testing:

As we can see from the write throughput numbers, we’re getting very close to the maximum throughput for a single blob…sounds like we’re maxing out our disk I/O throughput. Let’s see what we can do to alleviate this.


As you can see from the numbers above, we nearly doubled our write throughput and have nearly perfect write distribution across the data disks. Even though we did not get a doubling of the Batch Requests / sec or the customer application requests / sec, we did get a 45% increase and 43% increase respectively over the single disk configuration.

With the data files evenly distributed across 4 data disks, the write throughput to each disk is no longer nearly as close to our maximum VHD/blob throughput. We’ll call this success from a disk I/O perspective! We could have gone further down this path, but we had those pesky locking problems to deal with still, and we knew that alleviating those would also greatly reduce the TempDB usage.


Once again, we have nearly perfect write distribution across the 4 data disks. This time the write throughput has not doubled from the previous 2-disk configuration, *because* we have eliminated the disk I/O bottleneck on the SQL Server data disks! Overall disk I/O for the database has still increased, but at a smaller percentage because the database disk I/O is no longer the main bottleneck. Because of the smaller percentage increase in disk throughput, we also have a smaller increase in the Batch Requests / sec and the customer’s application requests / sec. 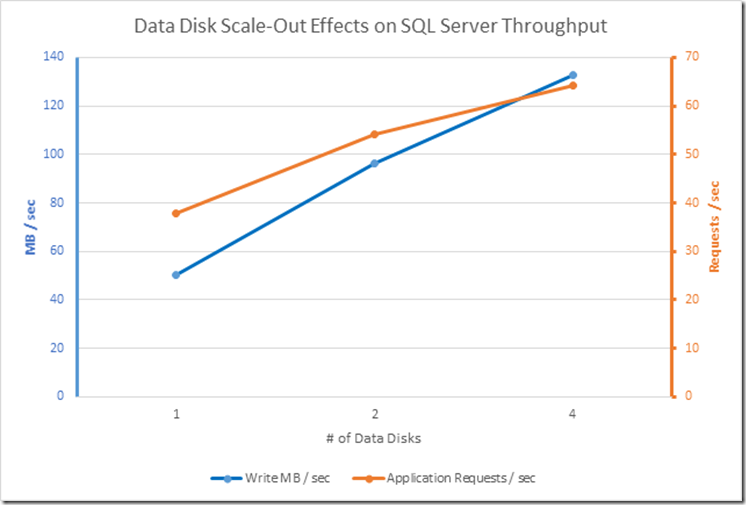 
Scaling out your SQL Server data file reads and writes applies just as much to SQL Server on Windows Azure Virtual Machines as it does to your on-premises configurations.