Spring has arrived, which means that RedisConf—the annual celebration of all things Redis—is almost here! Attending RedisConf is one of the best ways to sharpen your Redis skills by exploring best practices, learning about new features, and hearing from industry experts. You’ll also be able to virtually hang out with and learn from thousands of other developers passionate about Redis.

We love Redis here at Microsoft, so we’re excited to be showing up at RedisConf in a big way this year. We’ll not only be talking more about our new Azure Cache for Redis Enterprise offering, but we’ll also be hosting sessions and panels that dive deeper into the best ways to use Redis on Azure. Want to learn more? Here are seven reasons to attend RedisConf 2021: 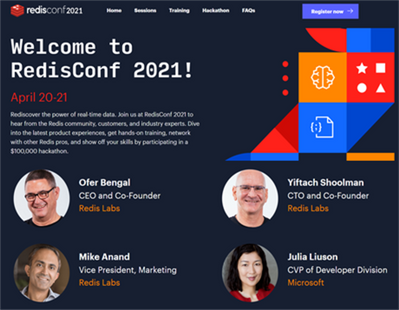 RedisConf kicks off on April 20th, and registration is free!  Sign-up now to attend. We’ll see you there.