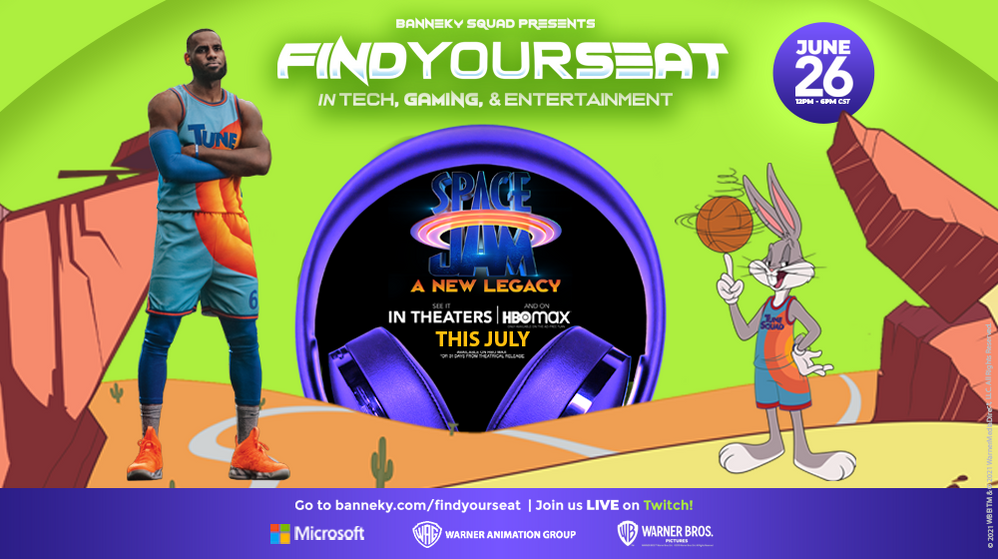 Join us on Saturday, June 26 from 10AM-4PM PT for a special virtual event in partnership with Warner Bros., Space Jam: A New Legacy, and Banneky. We’ll have athletes, gamers, game producers, and coders on hand to help you learn new coding skills and explore the intersection between sports, gaming, entertainment, and tech!

On top of these awesome sessions, you’ll also have the chance to win FaZe Clan merchandise, Xbox controllers, and Surface books!

Check out https://banneky.com/FindYourSeat for more details.

A bit about our partners:

Warner Bros. is the home of Tune Squad and the upcoming film Space Jam: A New Legacy, but have you heard of Banneky? Banneky is an education tech platform for middle and high school students who love art, sports, and gaming. On their site, you’ll find fun math and science lessons and behind the scenes access to the brands and influencers you love.

A bit about the film:

Welcome to the Jam! Basketball champion and global icon LeBron James goes on an epic adventure alongside timeless Tune Bugs Bunny in the animated/live-action event “Space Jam: A New Legacy,” from director Malcom D. Lee and an innovative filmmaking team including Ryan Coogler and Maverick Carter.

This transformational journey is a manic mashup of two worlds that reveals just how far some parents will go to connect with their kids. When LeBron and his young son Dom are trapped in a digital space by a rogue A.I., LeBron must get them home safely by leading Bugs, Lola Bunny, and the whole gang of notoriously undisciplined Looney Tunes to victory over the A.I.’s digitized champions on the court: a powered-up roster of basketball starts as you’ve never seen them before. It’s Tunes versus Goons in the highest-stakes challenge of his life, that will redefine LeBron’s bond with his son and shine a light on the power of being yourself. The ready-for-action Tunes destroys convention, supercharge their unique talents and surprise even “Kin” James by playing the game their own way.