In case you missed it, we gathered with customers from across the globe to have a conversation about Yammer best practices for dealing with difficult conversations in your Yammer network. We worked through a variety of real-life scenarios that customers brought to the table with the results. We learned from each other's experiences and gained some new insights that we can bring back to the different organizations using Yammer.

Take a listen to the recording and catch up on the main points below.

1. Real life scenarios for dealing difficult conversations on Yammer…what you would do?

2. How do you deal with the younger generation, lots of turn over, using Yammer?

3. Polarizing topics – what do you do when the model of negative conversation becomes the norm for your community? 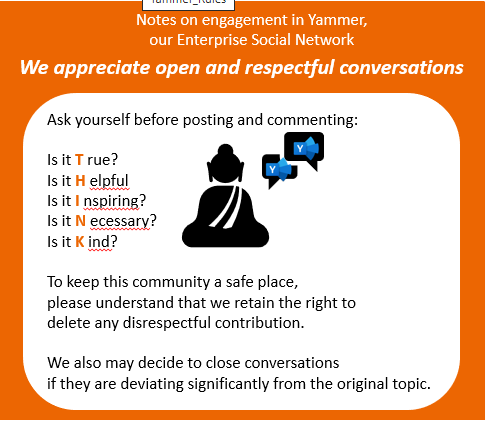 4. Any tools that could be added to help monitor these types of situations?

5. How is Yammer supporting the goals and the mission of the organization?

Thanks for joining us! Stay tuned for more customer conversations in the coming months.