A recent release has been causing a lot of frustration so this is a quick post to hopefully broadcast a temporary workaround.

The error is with Azure Function App zip deployment.

The workaround is to downgrade the cli version to 2.28.0. This slows down the pipeline considerably, but works. You can see the impact to my workflow below: 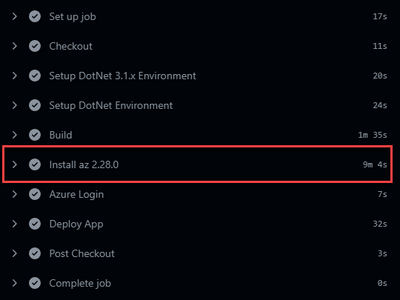 The yaml will remove the current version and install 2.28.0 and is shown below.

The real credit for this workaround goes to the GitHub community. Hard to say who suggested the workaround first.

This post will hopefully save someone out there frustration until the fix is available.