Today, we are excited to announce the public preview of Azure Virtual Network Manager (AVNM)! AVNM is a highly scalable and available network management solution that enables customers to simplify and scale their virtual networks in Azure. Customers have sought enterprise-scale network resource configuration and management in Azure. With the ability to define and apply connectivity and security configurations to their entire network in Azure, AVNM is their one-stop shop to centralized network management across regions and subscriptions.

What Can It Do?

Let’s dive into how AVNM can help customers build out entire network topologies, apply security rules consistently across their deployment, and manage network configurations at scale with confidence and simplicity.

In a mesh topology, a connection is established between each virtual network within the network groups that this configuration is applied to. 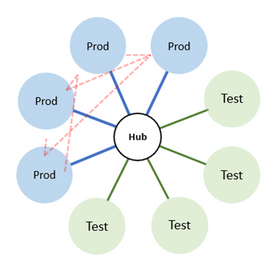 In addition, you can ensure all of your resources are always protected by the rules. For example, you can apply the security admin configuration blocking the traffic from high-risk ports to your production network group, and all of the existing virtual machines and newly created ones will be protected.

Resources to Get You Started