For many organizations, video analytics provide a powerful means for building intelligent applications and extracting business insights. While running video analytics at the edge is a powerful enabler for these applications, running intensive AI models solely on the edge device 24/7 can at times be inefficient, restrictive, and costly. What if some of the AI processing could be done on the camera instead of an edge device?

Axis Communications (Axis), the industry leader in network video, has been tackling this challenge with their AXIS Camera Application Platform (ACAP) and their best-in-class cameras. With ACAP, apps running AI can be installed directly on Axis cameras, allowing initial AI processing to be done on the camera. Intelligent cameras running built-in lightweight AI models thus provide a powerful solution for running video analytics at the edge. Azure Video Analyzer helps expand the capabilities of Axis cameras by providing a platform for end-to-end video analytics solutions that span the edge and the cloud.

In this article, see how Microsoft and Axis Communications are partnering to solve the problem of extracting insights from live video at the edge and recording video to the cloud. The solution presented in this article utilizes an edge gateway, an edge device that provides a connection between other devices on the network and Azure IoT Hub. A specific use-case shown in this article is event-based video recording, in which an edge gateway running Azure Video Analyzer Edge publishes video recordings to the cloud, based on events triggered from an Axis camera running motion detection.

Axis Communications and Microsoft have come together to support the development community with new tools to deliver cutting-edge AI solutions to the market. With Axis cameras and Azure Video Analyzer, developers can create solutions that fully utilize compute from edge to cloud--delivering efficient, secure and actionable insights for customers across many industries. - Johan Paulsson, CTO, Axis Communications

A Hybrid Approach for Connecting Axis Cameras to Azure

Connecting cameras directly to the cloud presents several issues, such as loss of internet connectivity and noncompliance with an organization’s policies. The use of an edge gateway between Axis cameras and Azure Video Analyzer presents a satisfactory medium between running AI fully at the edge and sending data directly to the Azure cloud.

An Example with Event-Based Video Recording

A quintessential use-case of this setup is event-based video recording (EVR). EVR refers to the process of recording video triggered by an event, which can originate from processing of the video signal itself or from an independent source. In the following tutorial, the Axis camera acts as the independent source, with motion detection running natively (as opposed to on a separate edge device, as previously demonstrated in Video Analyzer tutorials). Once video has been sent to Azure Video Analyzer, it can then be used for playback and posted in Microsoft applications such as Power BI. 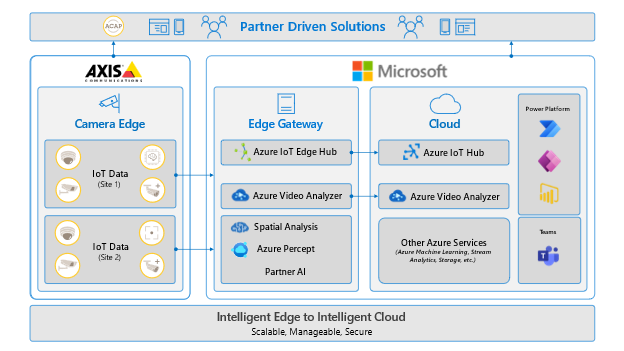 In the upcoming tutorial, the following hardware setup is used. For reference, screenshots are provided with example hostnames. Other hardware that meet the minimum requirements can be used as well.

In this setup, the Axis camera continuously sends a video stream via RTSP (Real Time Streaming Protocol), while the motion detection app installed on the camera continuously checks for motion. When the camera detects motion, it sends an alert in the form of a JSON payload via the MQTT protocol to the edge gateway. The edgeHub module receives the message and forwards it to the Video Analyzer Edge module. Once received, the module triggers a signal gate processer node to start recording video based on a desired configuration. The recorded video then gets saved to the Video Analyzer cloud service for playback. 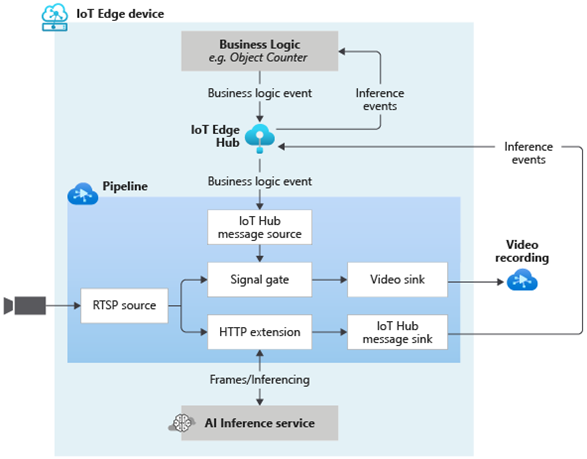 A diagram of event-based video recording in Azure Video Analyzer. Click to see the corresponding live pipeline topology for EVR.

The Axis documentation instructs users to send pulse messages to check whether the Axis camera is correctly communicating with the edge gateway. While sending pulses can trigger EVR, a richer demonstration comes from using the Axis camera’s native motion detection. Axis cameras meeting these hardware and firmware requirements can install motion detection by following these instructions: 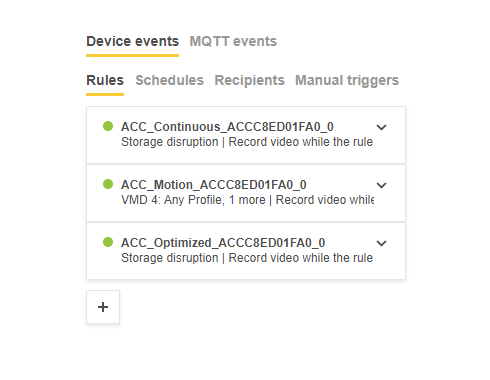 Create the appropriate Azure resources and set up the development environment.

The following Azure resources will be created in this section:

The leafToAVARecord route will trigger the signal gate processor to start recording whenever a message comes from the camera. The recordingTrigger is the name of the IoT Hub message source, as will be shown in the upcoming live pipeline topology. Click here to learn more about IoT Hub routing.

4. (Optional) Remove the node containing deployment instructions for the rtspsim module, as the Axis camera will stream live video.

Once the deployment manifest template has been edited and the development environment has been set up, the Azure Video Analyzer Edge module can be deployed onto the edge gateway.

Screenshot showing how to generate an IoT Edge deployment manifest in VSCode. 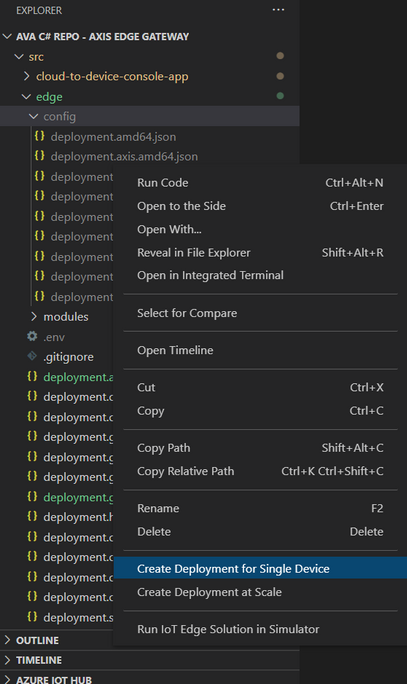 Screenshot showing how to create a deployment in VSCode.

A live pipeline topology describes how video should be processed and analyzed through a set of interconnected nodes.

To generate the topology, either use the VSCode extension (as shown in the image above) or copy the following topology and use the Direct Method pipelineTopologySet, by right clicking on the avaedge module in the Azure IoT Hub pane in VSCode.

Create and activate a live pipeline.

Once all the information has been filled out, click “Save and activate” to start the live pipeline. 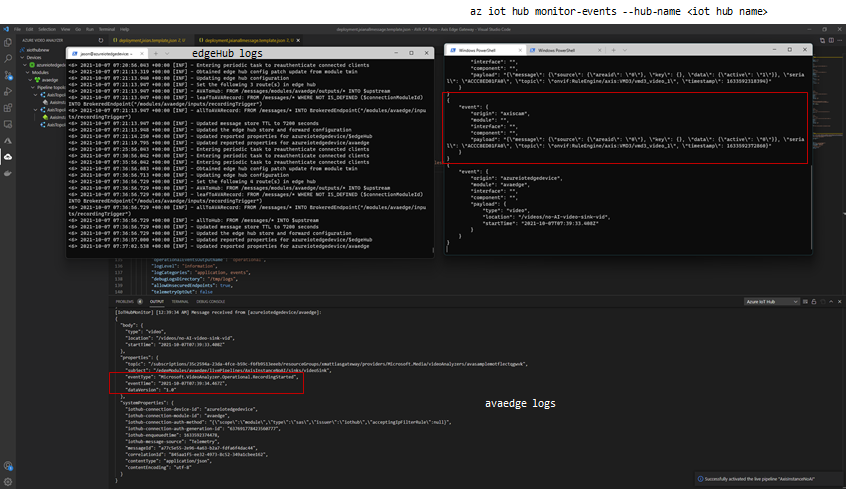 Screenshot showing the results. On the top-left terminal, the command `sudo iotedge logs edgeHub` is used to see logs from the edgeHub. On the top-right terminal, the command `az iot hub monitor-events –hub-name <iot hub name>` is used to see all events going through the Azure IoT Hub. At the bottom, Visual Studio Code displays messages flowing through Azure Video Analyzer.

In this article, an edge gateway was used to build a hybrid edge-to-cloud solution with an Axis camera and Azure Video Analyzer. For some situations in which an edge gateway is not needed, connecting a camera directly to the cloud may be preferred. To all solution builders looking to connect Axis cameras directly to the cloud, coming soon is the Azure Video Analyzer application for Axis cameras on AXIS ACAP. This app creates a secure connection between an Axis camera and the Video Analyzer cloud service, thus enabling low latency streaming. Stay tuned for the release of this app on Microsoft Tech Community.

For feedback, deeper engagement discussions, and to get the latest updates on the AVA ACAP App, please contact the Azure Video Analyzer product team at videoanalyzerhelp@microsoft.com

For additional development tools and a forum for discussion, ideas, and collaboration, join the Axis Developer Community at www.axis.com/developer-community.