Today we are pleased to announce that you will be able to enable much higher throughput levels for Azure Service Bus Premium. This is accomplished through two new features we are releasing in public preview. They will be available in East US and South-Central US soon, around Ignite timeframe, with more regions following.

First, we are releasing scaling partitions, which allows the use of partitioning for the premium messaging tier in public preview. This means that the overall throughput of a partitioned entity is no longer limited by the performance of a single message broker. Additionally, a temporary outage of a message broker, for example during an upgrade, doesn't render a partitioned queue or topic unavailable, as messages will be retried on a different partition.

Second, we are making a change to our infrastructure, which will result in more consistent low latency. This is accomplished by switching our storage infrastructure to a different implementation called Local Store. During public preview we will create partitioned namespaces using this new feature, but in the future all new namespaces will be created on Local Store.

Scaling partitions in premium namespaces work in close conjunction with scaling through Messaging Units, as the configured MUs on a namespace are equally distributed across the different partitions. Currently it is possible to scale up to 4 partitions, meaning we can scale up to a total of 64MU.

Additionally, there are some limitations which may be encountered during public preview, which will be resolved before going into GA. The first limitation is that it is not possible to use JMS on partitioned entities. The second limitation is around metrics, which are currently only available on an aggregated namespace level, not for individual partitions. 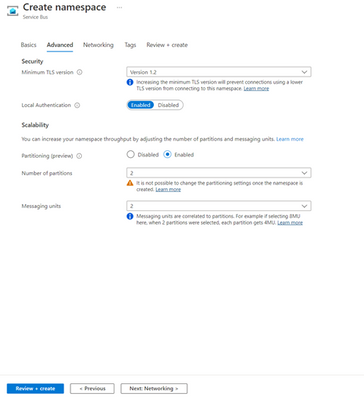