Enterprises and hobbyists alike have been using the Azure Computer Vision’s Image Analysis API to garner various insights from their images. These insights help power scenarios such as digital asset management, search engine optimization, image content moderation and alt-text for accessibility among others.

We are thrilled to announce the public preview release of Computer Vision Image Analysis 4.0 which combines existing and new visual features such as Read (optical character recognition), captioning, image classification and tagging, object detection, people detection, smart cropping into one API. One call is all it takes to run all these features on an image.

The Read (OCR) feature integrates more deeply with the Computer Vision service and includes performance improvements that are optimized for image scenarios that make OCR easy to use for user interfaces and near real time experiences. Read now supports 164 languages including Cyrillic, Arabic, and Hindi languages.

Tested at Scale and Ready for Deployment

You can get started with the public preview by trying out the visual features with your own images on Vision Studio. Upgrading from a previous version of the Computer Vision Image Analysis API to V4.0 is simple with these instructions.

We will continue to release breakthrough vision AI through this new API over the coming months, including capabilities powered by the Florence foundation model featured in this year’s premiere computer vision conference keynote at CVPR. 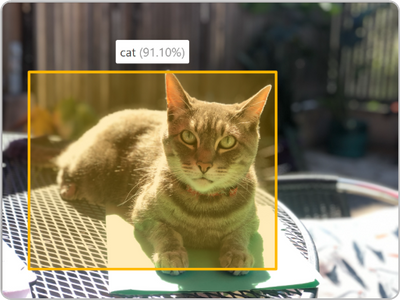 Object detection showing a cat with a 91.10% confidence score.

Start improving the way you analyze images with Image Analysis 4.0 with a unified API endpoint and new OCR Model.