This blog is a session recap from BRK32 – From low code to pro code: building and buying collaborative apps to power an evolving workplace at Microsoft Ignite 2022.

In today's IT world, there is a paradigm shift in how we work and how developers create apps. Users expect seamless apps that fit their workflows and enable collaboration. New apps should be designed to meet these expectations.

In the session, such an example app was presented by United Airlines. The company uses a mobile app named UChat, which serves as a communication and collaboration platform for users. The app displays the flight shifts and enables, among other things, direct communication and simple trip exchanges between the flight attendants. Furthermore, Teams enables communication with users in other departments of the organization.

From a company perspective, this direct communication tool is a game changer for all coworkers; also, it allows the employees to serve their customers well. Microsoft Teams is the basis for mutual communication and such experiences. 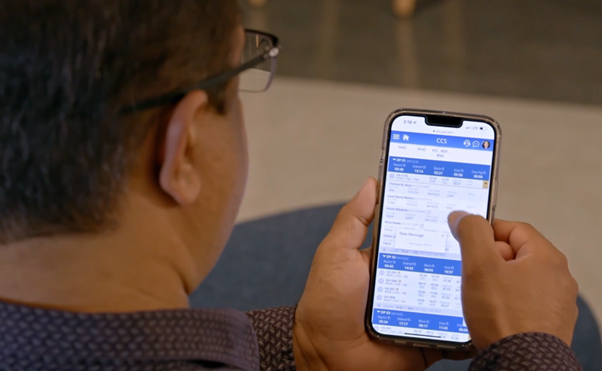 The success of such Teams apps is remarkable. As of today, more than 80,000 line-of-business Teams apps have been built by Microsoft customers. The Teams marketplace hosts over 1,600 apps developed by partners and serves as a thriving ecosystem.

Sukhmani Lamba informed about new and interesting topics in Teams, which are all currently in Public preview:

These features allow Teams users to view the content in the app or to instantly launch a new meeting without leaving the Teams context with the Quick Action buttons in the Adaptive Card, as shown here.

As we learned, Adaptive Cards play an essential role in the integration and acceleration of asynchronous collaborative workflows inside of Teams. As announced at Build conference in spring 2022, Adaptive Card-based loop components are moving forward and evolving.

This was shown in a demo with a workflow initiated from an SAP S/4HANA Cloud system. A Credit Manager receives information about a blocked sales order in Microsoft Teams. The chat automatically includes a loop component showing relevant account information for the case. The loop component can even be copied in Teams and pasted in Outlook as well for further modifications, approval, and more. 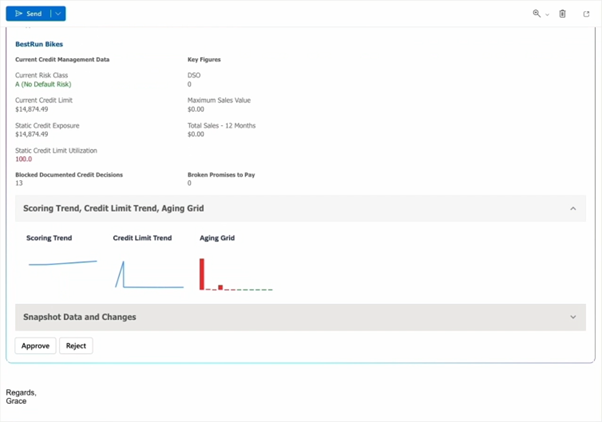 Loop components are always live and in-sync; they're portable across Teams and Outlook and embeddable anywhere. Adaptive Card-based loop components will be available to end users in a public preview beginning in the first quarter of 2023. For SAP S/4HANA customers, these new features are available through SAP's early adopter program.

The next updated topic is Teams Live Share. Teams Live Share is a way to build multi-user real-time collaboration into any app to co-watch, co-create, and co-edit content in meetings. For example, the new Live Share Canvas brings shared pens, highlighters, laser pointers, and cursors to any Teams Live Share application with just a few lines of code.

Paul Gildea introduced the Teams Toolkit in Visual Studio Code. He highlighted some of the new templates that come right out of the box to integrate workflows inside of Teams, from scenario-based templates to address specific developer needs, to the notification bot template using notifications.

The Teams Toolkit UI helps to extend the engaging app experience with responsive apps supporting the various display modes like light mode, dark mode, and high contrast across Microsoft 365. When installing the Teams app, we see a new tag that says the app works inside of Teams, Office.com, and Outlook. The Teams app interacts perfectly in all clients without any code changes.

Miti Joshi informed about new options for using low code solutions with the Collaboration controls for Power Apps. In the Power Platform, makers can create and send engaging and interactive mini apps. In a demo, Miti showed an Adaptive Card in Power Apps Studio based on a Dataverse table that was copied directly into a Teams chat. Each user sees a personalized view, and they can even make updates that are reflected immediately in Dataverse. 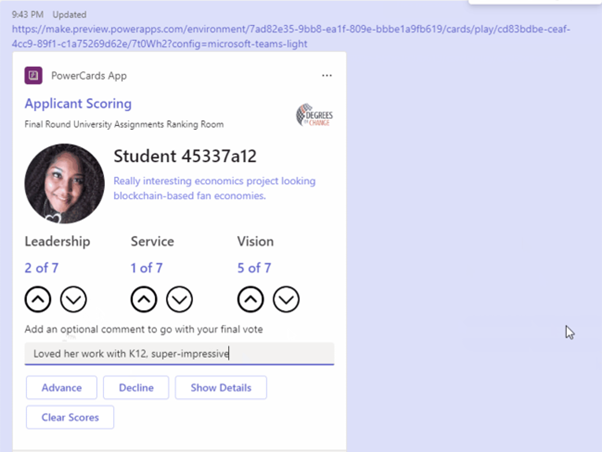 Using Collaboration controls, makers can easily drag and drop their favorite Microsoft 365 and Microsoft Graph API services directly into their own model-driven Power Apps to create a seamless experience for organizations using Power Apps and Teams. Possible application examples are the creation of meetings in Outlook, requesting approvals, accessing SharePoint, Bookings, Planner, and many other collaboration scenarios in the Microsoft 365 world.

Embed Teams into Your Apps

Graham Sheldon showed another demo app that uses Microsoft Graph APIs, and Azure Communication Services integrated in CRM app. Here, user Serena can use features like sending an SMS, calling a contact, or scheduling meetings right in the custom app. 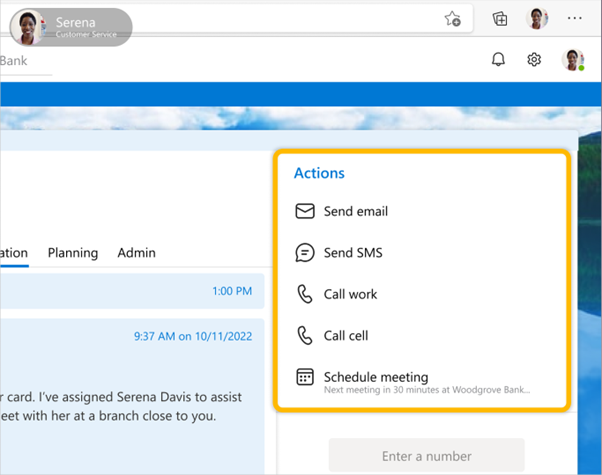 This demo shows an example on how you can bring audio, video, chat, and telephony for Teams users, sending SMS, and email notifications to any custom app that you build. 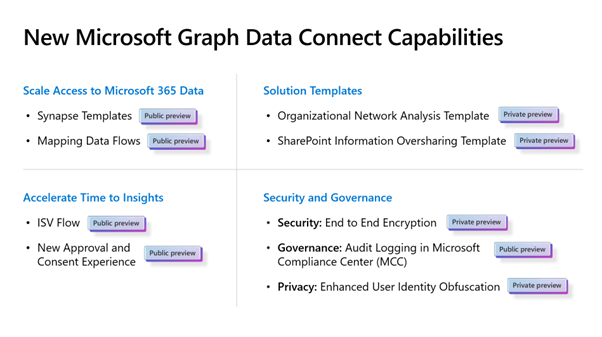 Two make it easier for ISVs to build their solutions, two significant updates have been made to Microsoft Graph Data Connect: the approval and consent process has been improved, and Azure billing can now flow directly to the ISV, instead to the customer.

By making this a default setting, Microsoft 365 is helping to ensure that there's no inadvertent leakage of data in transit or at rest. 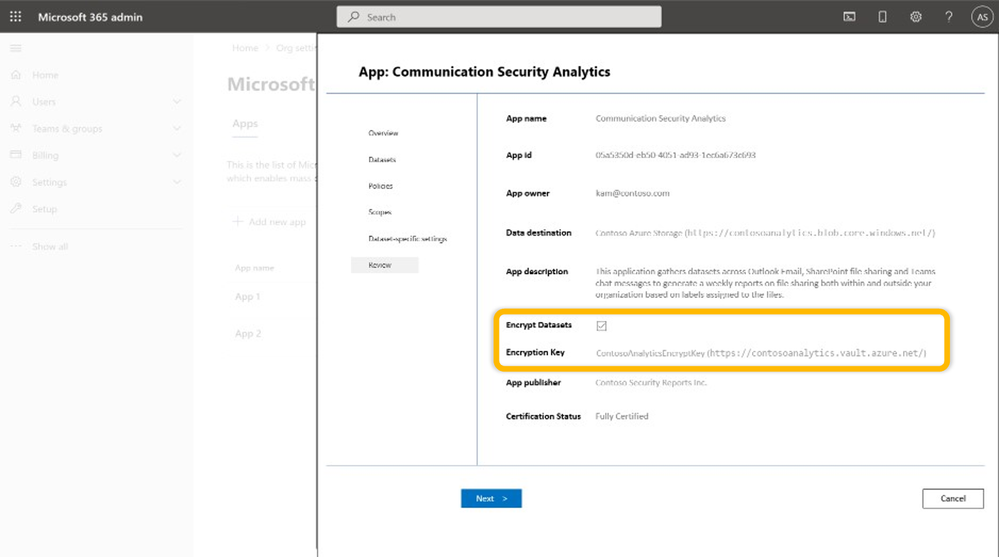 The Microsoft 365 app certification gives customers assurance that apps that have received certification have strong security and compliance practices in place to protect their data, security, and privacy. 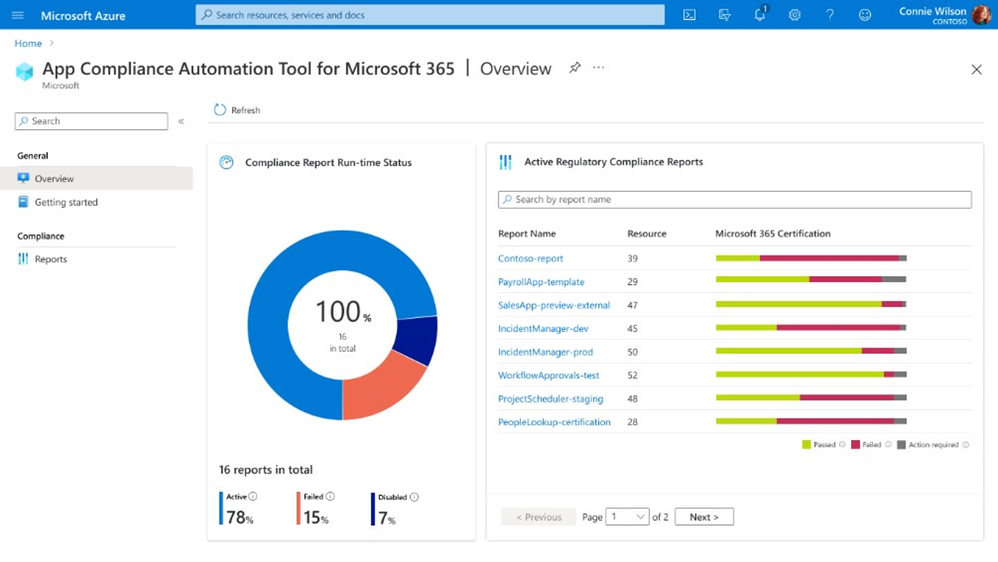 ACAT is easy to use and shows a summary and details of important controls in the app certification process. If a certified app falls out of compliance, you can quickly respond. The tool is designed to help developers create compliant apps.

This was a fantastic session with lots of news. The team has shown several features and announcements to unleash the creative power of their teams to stay focused, flexible, and agile.

Here is a brief overview of the topics covered in this session:

Each topic will be covered in more detail in subsequent sessions. We recommend checking this out!