Pilot Things, pioneer and expert in sensor-native applications, has launched Power IoT in partnership with Kerlink, a premier provider of LoRaWAN products.

What are the main issues with IoT projects?

I believe we all agree that the following are common issues faced in IoT projects development: complexity, projects stuck in the Proof-of-Concept phase (POC), long time Return on Investment (ROI).

We believe IoT is complex because it requires a combination of networking and software skills to build end to end solutions integrating IoT sensors data. As a software developer you have to learn networking technologies which is not your job.

Microsoft Power Apps is a low code platform that streamlines the development of business applications and delivers results very quickly. It tackles the POC stopper and the long time ROI issues.

It is an amazing solution to build software applications, but it does not include an easy way to integrate IoT sensors data and control.

How can we tackle sensor integration complexity?

Power IoT bridges the world of IoT devices with the no-code world of Power Apps. It is composed of 2 parts: a server which runs as a managed application in your Azure subscription and a Power Apps connector (see diagram above).

The key to tackle complexity is to provide a simple solution that integrates sensors data to Power apps.

We support more than 500 sensors that simply connect to the LoRaWAN gateway and that you can use in your Power apps application.

So, you must have at least one Kerlink LoRaWAN gateway to start using Power IoT.

With LoRaWAN and the Kerlink gateway, we now have a simple way to talk with sensors. Now time to look at the user experience to create Power Apps pages that integrate data from these sensors.

We provide sensor twin components as samples on GitHub. These components are Power Apps software components you can drag and drop directly in your pages.

Here is an example for the Milesight AM103 product: 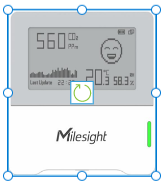 These components look like real sensors, plus you can easily get the sensor data, like CO2, from within your app. Values are accessible as component properties like below:

With Power IoT, Pilot Things is offering a solution to the problem of natively integrating sensor data into Microsoft Power Apps applications.

Real physical sensors have now a digital twin you can use as any software component.

We truly believe Power IoT opens amazing opportunities to make your office, your school or your shop connected.

We encourage sensor manufacturer to contact us to build their sensor twin component.

How to get started

Starting guide: How to start with Power IoT

Pilot Things, revolutionizing the software industry through building applications that are sensor-native, was founded in 2019 by Eric Szymkowiak, a seasoned IoT expert with over 20 years of experience in information systems. Pilot Things helps city and industry smartification through dedicated software for sensors. We deliver end-to-end solutions or a suite of IoT software components to convert your applications to natively support sensors.

With Power IoT you can use the data from all your sensors to create mobile applications, automate actions, and analyze data in just a few clicks. Microsoft Power Apps is an online service that enables rapid and low-code development for building custom business apps. You can use Power IoT to develop apps that connect to your company's sensors. With Power IoT, anyone can build an IoT solution, making it the simplest way to use sensors. Pilot Things has an ever-growing sensor library that ensures the compatibility of more than 500 sensors with Microsoft Power Apps.