One of my customers had a strange issue, whenever they attempted to open the Application Pools node from the IIS Manager GUI,

an alert popped up with an error saying "Could not load file or assembly Microsoft.Web.Configuration.AppHostFileProvider" 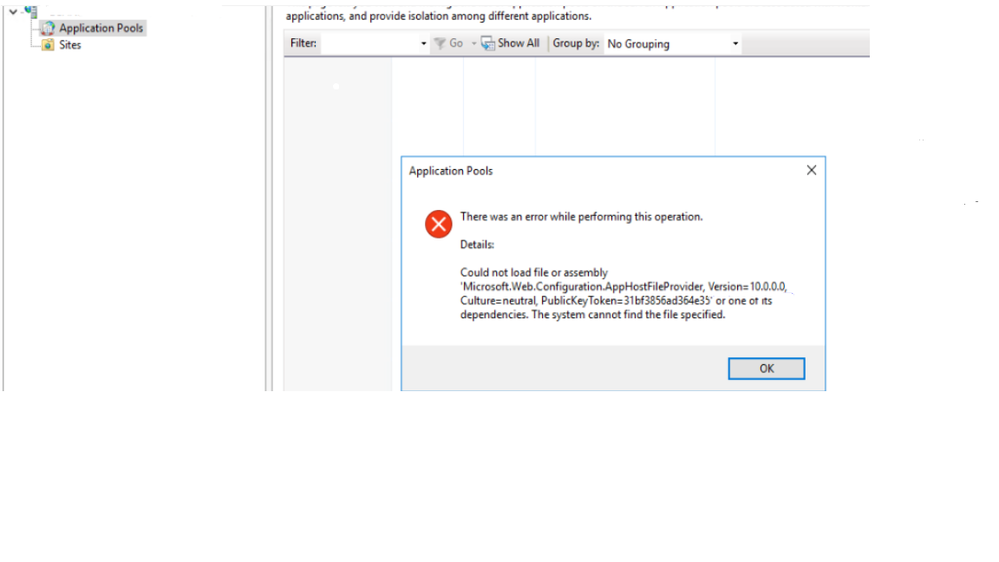 This was a little strange as it did not affect the w3wp process which we generally troubleshoot but instead the inetmgr GUI itself!

However, as is the case with all assembly loading errors, Fusion Logging was the much needed light in the dark.

This is what I see in the Fusion Logs

As highlighted, it appears that the AppHostFileProvider is accessible initially, however we see that we use InetMgr.exe.config file

Digging in further on my local IIS setup, I found that this particular configuration file is not typically present, however I could see

it in the customer's environment. This file is generally present in older versions of IIS and is not currently in use. How it got into the

customer's fairly new setup is still a mystery, but it does not appear to be relevant to their hosting criteria.

Upon checking this file, I can see the following

And it explained everything! It directs the configuration to run under .NET 2.0 instead of 4.0. Hence when we try to access the

above DLLs they are not found and even if we place them there .NET 2.0 cannot load them.

On a test environment, we confirmed that this configuration file is not needed as suspected. We changed the name to InetMgr.exe.config.old so that it is no longer used.

And the issue was resolved!