Logic Apps connectors provide quick access from Logic Apps to events, data, and actions across other apps, services, systems, protocols, and platforms. By using connectors in your logic apps, you expand the capabilities for your cloud and on-premises apps to perform tasks with the data that you create and already have. Azure Logic Apps connectors are powered by the connector infrastructure that runs in Azure. A workflow running on the new runtime can use these connectors by creating a connection, an Azure resource that provides access to these connectors.

In this blog post, I am showing how we can leverage this extensibility framework to create a built-in  CosmosDB connector with a trigger and no actions. In this example, whenever the new document is added in the lease collection or container of Cosmos DB, the Logic Apps trigger will fire and execute the Logic App with the input payload as Cosmos document. This built-in connector leverages the functionality of Azure function capability for Cosmos DB trigger based upon the Azure Function trigger binding. In general, you can add any action or function trigger as part of your own built-in connectors. Currently trigger capabilities are limited to Azure Function specific triggers only, in future the Logic app will support non-Azure function triggers also.

There are mainly two operation parts that a developer would need to implement:

Operation descriptions are metadata about the operations that the custom built-in connector implements. These are primarily used by the Logic Apps designer to drive the authoring and monitoring experience related to these connectors' operations. For example, designer uses operation descriptions to understand the input parameters required for a given operation as well as facilitate the generation of outputs property tokens based on the schema of the output of an operation.

Logic Apps runtime will use these implementations at runtime to invoke the specified operation in the workflow definition.

In order to hook up with function runtime the new built-in connector extension need to be registered with the Azure Function runtime extensions. The details are discussed later in this blog.

Here in this sample connector, I am developing the CosmosDB built-in custom connector which has only one  trigger and no actions are available. The details of the operations are described below:

To develop your own built-in connector, you need to add the work flow webjob extension package. , I am creating the .NET Core 3.1 class library project in visual studio and added the Microsoft.Azure.Workflows.Webjobs.Extension package as Nuget reference to the project. The Service provider interface is implemented to provide the operations of the CosmosDB connector.

The webjob extension Nuget package which was added to the class library project provides the service provider interface IServiceOperationsTriggerProvider which needs to be implemented.

The picture below shows the implementation of methods as required by the Logic app designer and Logic app runtime. 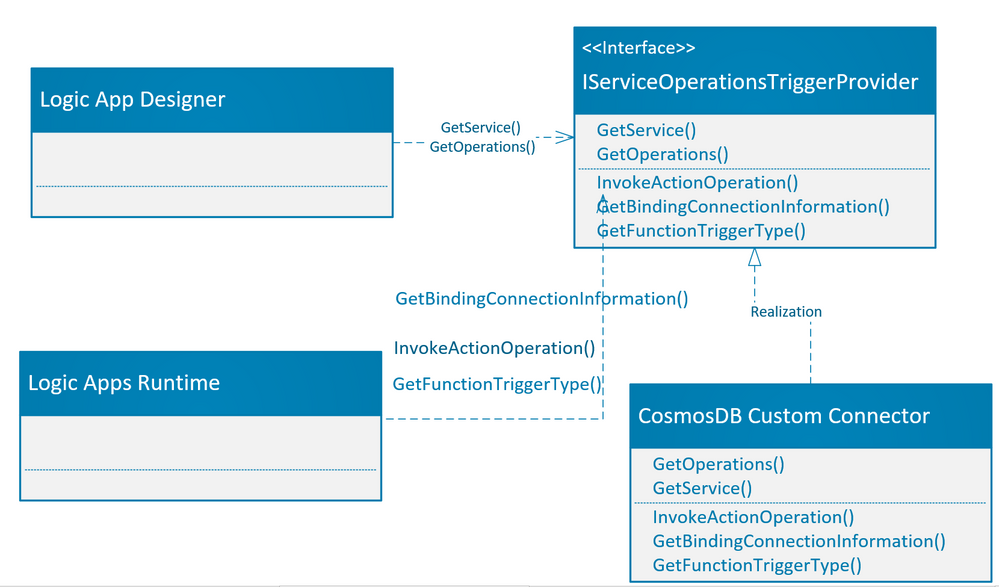 The details of the methods which are required to be implemented are tabulated below:

Adding the converter is optional depending upon the type of data you need as an input to the built-in trigger. In this example I am converting the Document data type for Cosmos DB Documents to JObject array.

The complete implementation of all three classes as mentioned above are given in the following code map diagram. 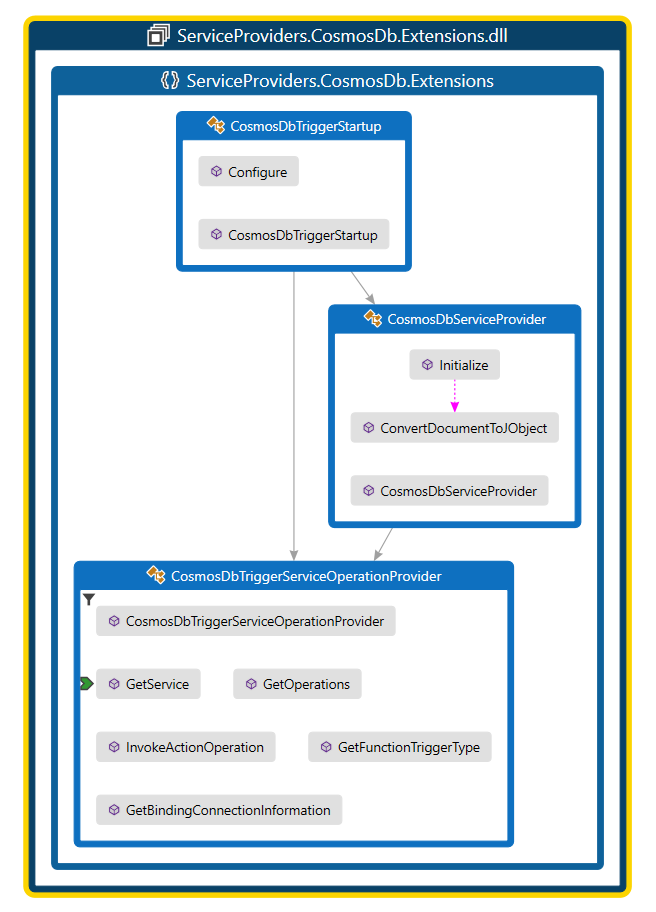 You need to update the extensions.json in extension bundle to add the above NuGet reference. You can refer the deploy.ps1 script.

Update the extension bundle to include the custom built-in connector.

Create the Logic App project and install the extension package given below:

Once you open the workflow in designer (make sure you close any func.exe process in case if it already running before opening the designer), you should be able to see the newly added connector. 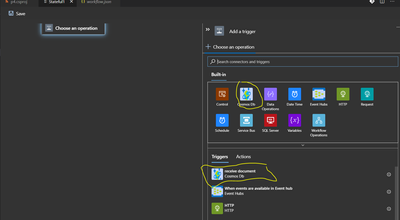 You can now add connection string of Azure cosmos DB and add new document in the database under collection or lease collection to test the trigger by creating a simple logic app using the CosmosDB trigger.

Specify the database name and collection name for the trigger.

Execute F5 in VS code and invoke trigger by adding a new item using data explorer of your CosmosDB account as shown below to trigger the workflow.

The sample code can be downloaded from the repository. https://github.com/praveensri/LogicAppCustomConnector/tree/main/ServiceProviders.CosmosDb.Extensions