When you’re working on a project, it’s important to understand how your different tasks affect when your project will end, so you can reach your important deadlines. To help with this, Project for the web now allows users with Plan 3 and Plan 5 licenses to view their project’s critical paths on the Timeline view.

What is my project’s critical path?

For example, if you have a project with:

Assuming your tasks have no dependencies, the critical path is just Task 3, as Task 3 ends the latest, and thus defines when the project overall will end.

If there was a dependency Task 2 --> Task 3, then the critical path would be Task 2 & Task 3, as the path between Task 2 & Task 3 defines when the project overall will end.

How can I use the critical path feature?

If you are a Project user with a Plan 3 or Plan 5 license, you can see the critical path by going to Timeline>Filters. 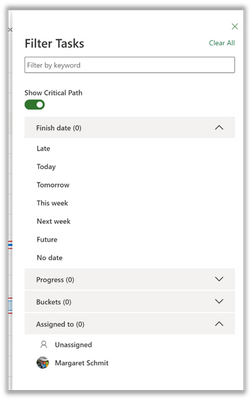 The toggle will be off by default.

Once the toggle is turned on, Project will highlight your critical path tasks in red.

Q: When I turn the critical path feature on, will the other users on my project be able to see it?

Q: Will the critical path feature still be on if I reload my project?

A: The critical path toggle will be reset every time you refresh your page or leave & return to Project for the web.