The most recent addition to Microsoft’s Turing Universal Language Representation Model family (T-ULRv6) has achieved the top position on both the Google XTREME and GLUE leaderboards, the first time that a single multilingual model has demonstrated state-of-the-art capabilities in both English and multilingual understanding tasks. The result of a collaboration between the Microsoft Turing team and Microsoft Research, the T-ULRv6 XXL model is based on “XY-LENT,” which leverages X-Y (non-English Centric) bitexts and incorporates the key innovations of XLM-E, the improved training data and vocabulary, and the advanced fine-tuning technique of XTune. Furthermore, to enable scaling to XXL sized models, T-ULRv6 leverages the memory optimization benefits afforded by ZeRO. To effectively utilize X-Y bitexts, the team adopted a novel sampling strategy and reconstructed the vocabulary using VoCap, which ensures an efficient distribution of data across languages and helps mitigate sparse sampling distributions from previous works. The XXL model variant outperforms both XLM-R XXL and mT5 XXL while being ~2x and ~3x smaller, respectively.

T-ULRv6 powers the language universalization of Microsoft Bing, enabling users to search and discover information across languages and domains. T-ULRv6 will soon enhance other Microsoft products with its multilingual capabilities.

XTREME, or Cross-lingual TRansfer Evaluation of Multilingual Encoders, is a benchmark covering 40 typologically diverse languages across 12 language families, with nine tasks that require reasoning about syntax or semantics.

GLUE – or the General Language Understanding Evaluation benchmark – is a collection of resources for training, evaluating, and analyzing natural language understanding systems. 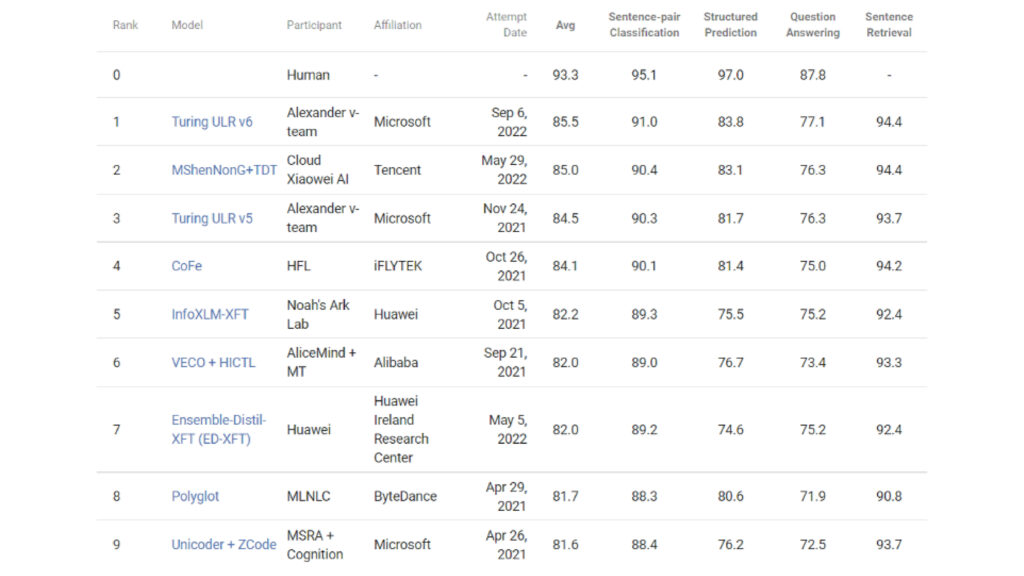 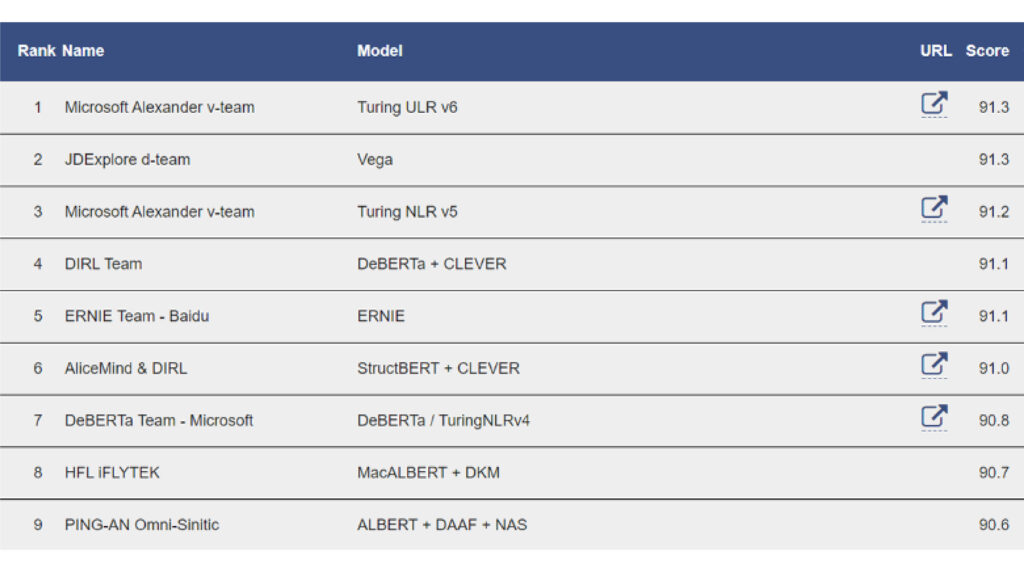 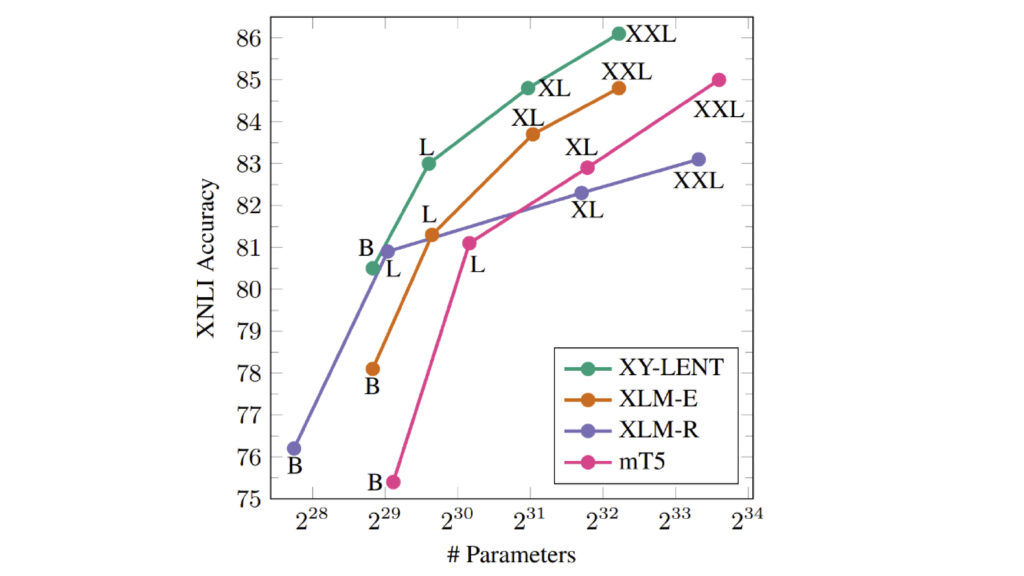 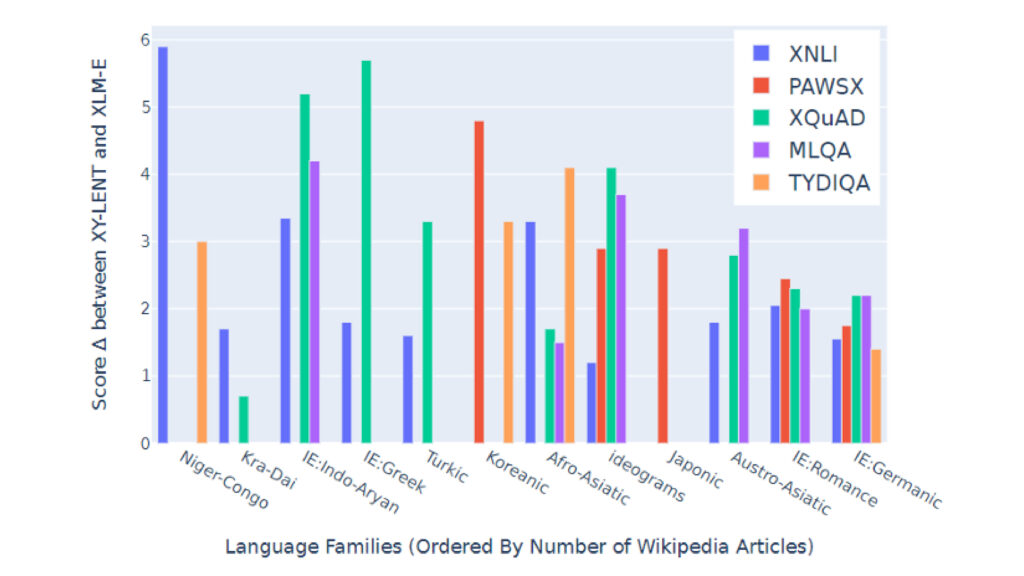 End of slideshow for:
Read the blog
Read the paper

Recent advances in machine learning architectures have induced a paradigm shift from task-specific models towards large general-purpose networks. For instance, in the past few years we have witnessed a revolution in the domains of natural language and computer vision with models such as GPT-3, BERT and DALL-E. The field of robotics is still mostly riddled with single-purpose systems architectures whose modules and connections, whether traditional or learning-based, require significant human design expertise. Inspired by these large pre-trained models, this work introduces a general-purpose robotics representation that can serve as a starting point for multiple tasks for a mobile agent, such as navigation, mapping and localization.

We present the Perception-Action Causal Transformer (PACT), a generative transformer-based architecture that aims to build representations directly from robot data in a self-supervised fashion. Through autoregressive prediction of states and actions over time, our model implicitly encodes dynamics and behaviors for a particular robot. This representation can then function as a single starting point to achieve distinct tasks through fine-tuning with minimal data.

-based 3D telemedicine system to increase access to healthcare

The Covid pandemic has increased the usage of remote health consultations and underscored the need for a better system. Current 2D telemedicine engagements fail to replicate the fluency or authenticity of in-person consultations. Real-time 3D telemedicine has previously been proposed within a research setting only, with constraints on complexity, bandwidth and technology.

This research reports on an international collaboration on the participatory development and first validated clinical use of a novel, real-time 360-degree 3D telemedicine system worldwide. NHS Greater Glasgow and Clyde have been working with Microsoft since 2019 to assess how health care could leverage Microsoft’s 3D telemedicine, focusing on plastic surgery patients and leveraging Microsoft’s Holoportation

This research was designed to compare validated outcome measures of a patient-centered 3D telemedicine system with a 2D system, assess alignment with an in-person consultation, and to ensure safety, reliability and clinical concordance. In three separate studies, the 3D system improved patient metrics in comparison to 2D telemedicine, suggesting that remote consultations could get closer to the experience of face-to-face consultations.

We instantiate this framework starting with unit tests; tests serve as weak yet formal specifications of a module. We can leverage the abundance of human-written unit tests to train models. Further, these specifications (tests) can be checked using concrete execution without the need for more sophisticated abstract interpreters.  In prior work on TOGA, we demonstrated a neural model for synthesizing test oracles for a method and illustrated its use in finding functional bugs in code. In this work on TiCoder, we describe an interactive workflow to formalizing the informal user-intent through such model-generated tests and improving the accuracy, correctness and understanding of generated code.