The most common way to load test applications is to simulate a specific number of virtual users. But what if you want to test the system to make sure it can handle a desired number of requests per second (RPS) ? For example, you may want to load test a payment gateway service for the number of transactions that can be processed every second. RPS or throughput is a crucial metric that reveals fundamental information about the tested system. Every system has a critical point in terms of throughput. Once the system reaches the critical point, it might keep the throughput around the same level, but the response times go up  or the requests get throttled.

In this article you’ll learn how to:

Configure your script to load test a target RPS

The Throughput Shaping Timer plugin in JMeter enables you to set the shape of desired RPS . RPS need not be constant throughout the test and can vary over time based on your requirement. For example, you may want to start with a slow ramp up, hold the load for a while and then increase it to a higher load to stress the application.

Let’s create a test script to demo the possibilities of the plugin.

In the Thread Group - provide the duration of the test and the number of threads. You may wonder how many threads you should run to achieve the desired RPS. Thread pool size can be calculated as RPS * <max response time> / 1000. The higher your desired rate, the more threads you will need. The more response time service has the more threads you will need.In this example, the service response time is 3 milliseconds (ms) and the target RPS is 4000, i.e. we would like to test if our service can handle 4000 requests per second, with the max response time being 3ms. The thread pool size would be 4000 * 3 / 1000 = 12 threads. You can have some additional threads for buffer capacity. we’ve added 15 threads.

A few points to note:

Screenshot of a test plan in JMeter with a thread group

JMeter starts with 0 RPS and increases to 4000 RPS in the first 60 secs. After that the RPS is maintained constantly at 4000 for the remaining 240 seconds 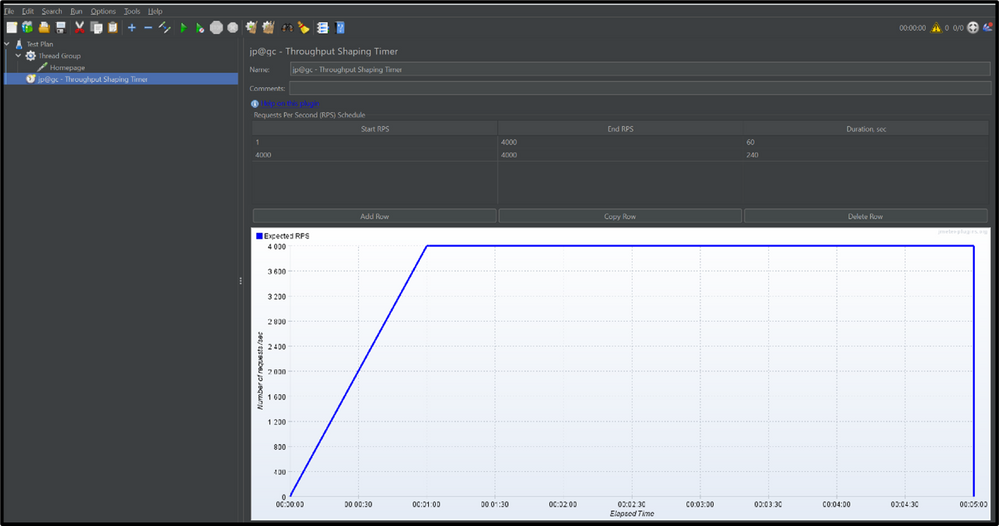 As you run the test, you can see (in the below screenshot) that the Throughput Shaping Timer tries to maintain the RPS schedule throughout the test and achieve the target.

If the server is not able to handle such a load, the throughput will be lower. You can monitor the server-side metrics in Azure Load Testing to help you identify the bottlenecks of your application. In our example, we tried to achieve a target of 15000 RPS. However, the app could not handle this throughput, resulting in the actual RPS to be much lower.

Screenshot of a test run in Azure Load Testing where the app could not handle the desired throughput.

Looking at the server-side metrics for my application, we find that the Memory utilization for the App Service was high (>60%). This means, we may need to upgrade the App Service Plan to achieve a higher throughput. Identifying the bottlenecks enables you to take preventive measures to ensure your application can give you the desired throughput during peak load.

Screenshot of the server side metrics in Azure Load Testing indicating that the memory utilization of the app service was high.

What else are you waiting for? Try it out and let us know if you were able to test your system for the desired throughput with Azure Load Testing. You can follow this tutorial to learn everything that you need start running a load test on Azure Load Testing and identify performance bottlenecks.

If you have any feedback on Azure Load Testing, let us know through our feedback forum. Refer to the previous blogs on Azure load testing here.