Special thanks to: Ross Bevington

Following the September 14th, 2021 release of three Elevation of Privilege (EoP) vulnerabilities (CVE-2021-38645, CVE-2021-38649, CVE-2021-38648) and one unauthenticated Remote Code Execution (RCE) vulnerability (CVE-2021-38647) in the Open Management Infrastructure (OMI) Framework, analysts in the Microsoft Threat Intelligence Center (MSTIC) have been monitoring for signs of exploitation and investigating detections to further protect customers. We have some things to share about current attacks in the wild, agents and software involved, indicators for defenders to look for on host machines, and to share new detections in Azure Sentinel.

Attacks in the wild

At Microsoft we monitor for attacks against our cloud services to inform our future security research, track emerging threats, and to improve the detection coverage of our security offerings.  As part of that work, MSTIC is monitoring for exploitation of the OMI related RCE (CVE-2021-38647).  To date we have seen several active exploitation attempts ranging from basic host enumeration (running uname, id, ps commands) to attempts to install a crypto currency miner or file share. (Details available below in Hunting cues section). We have also seen others in the community report similar behavior to include installs of the Mirai botnet. While many of the attackers are looking for port 5986, we are also seeing attacks on port 1270.  Due to the number of easily adaptable proof of concept exploits available and the volume of reconnaissance-type attacks, we are anticipating an increase in the number of effects-type attacks (coin miners, bot installation, etc.).

OMI is an open-source project to further the development of a production quality implementation of the OMI CIMOM is also designed to be portable and highly modular. In order to attain its small footprint, it is coded in C, which also makes it a much more viable CIM Object Manager for embedded systems and other infrastructure components that have memory constraints for their management processor. OMI is also designed to be inherently portable. It builds and runs today on most UNIX® systems and Linux. In addition to OMI's small footprint, it also demonstrates very high performance.

In a nutshell, anyone with access to an endpoint running a vulnerable version (less than 1.6.8.1) of the OMI agent can execute arbitrary commands over an HTTP request without an authorization header. The expected behavior would be a 401 unauthorized response. However, the user is able to execute commands with root privileges.

In addition to monitoring for incoming connections over ports 5986, 5985 or 1270 to vulnerable systems, there is more to explore at the endpoint level.

In addition, there is one support provider named the RunAsProvider which provides the following classes:

Based on the initial research from Wiz, the following command was used to explore network traffic in order to craft an HTTP request to test the vulnerability:

During testing, we used the Scxadmin tool, available as part of SCX, to increase all logging to VERBOSE and identify additional sources of data. The following command was used:

After running public proof-of-concepts to test the vulnerability, we validated that the code was being handled by the RunAsProvider :: Invoke_ExecuteShellCommand class:

Checking logs from auditd via Syslog, we also identified where the code was being executed from:

We tested the same in our lab environments, and we observed the same behavior which is shown below:

Looking at the code behind the components of the RunAs providers, there are some references to it:

Similarly, scripts can be run using the ExecuteScript provider. In this case, the body of the http request contains a reference to ExecuteScript.  In the below example, the command ‘id’ is base64 encoded to ‘aWQ=’:

In this case, the script is passed into a temp directory which you can see in the execve logs. Look for a commandline similar to /bin/sh /etc/opt/microsoft/scx/conf/tmpdir/scx*. This command will still show as being run from the same /var/opt/microsoft/scx/tmp current working directory.

Of note, this is the method we have seen used with attackers attempting to install coin miners.

Relevant security data required for understanding the impact of an attack is produced in multiple locations. Azure Sentinel has made it easy to collect the data from multiple data sources easily. This section of the post contains guidance and generic approaches to look for the OMI related activity in various data feeds that are available by default in Azure Sentinel or can be onboarded to Azure Sentinel.

Some Azure products, such as Configuration Management, open an HTTP/S port (1270/5985/5986) listening for OMI. Attackers can exploit the vulnerability in OMI where these ports are open by sending a specially crafted message via HTTPS to port listening to OMI to gain initial access to the machine.

The Azure Sentinel query linked below tries to identify connection attempts from the external IP addresses to the OMI management ports (5985,5986,1270). The query primarily leverages the Network Session normalization schema (imNetworkSession)  as well as a few other logs to look for this network connection activity from an external IP address. Where available, it tries to restrict the results to the relevant OMI process. The results can sometimes be noisy; hence the query has been shipped as a hunting query.

Normalizing parsers for leveraging the imNetworkSession normalized schema are required for this query to work and can be deployed in a click using an ARM Template.

Azure Service Health has also sent notifications to potentially impacted customers. In the impacted environments where customers can run a quick query to check if they are impacted by this Vulnerability.

This hunting query uses auditd  security events collected via the Syslog data connector to explore the use of the SCX RunAsProvider Invoke_ExecuteShellCommand to execute any UNIX/Linux command using the /bin/sh shell. 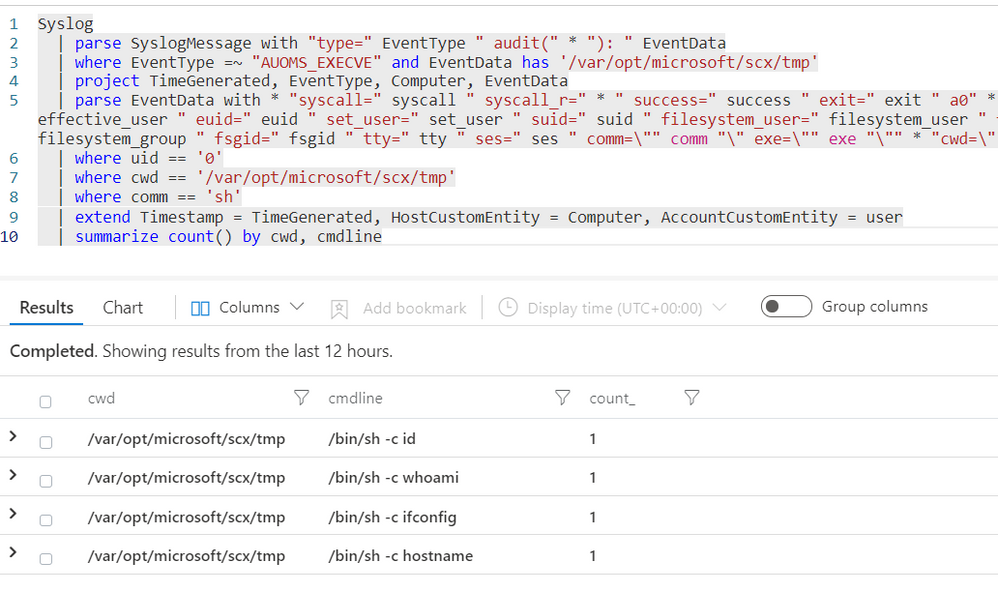 Public Discussion About Attacks in the wild: